This story is very similar to fiction, however, according to residents of the Kemerovo region, among them the most incredible stories about this event, and smoke without fire is known to does not happen … It happened supposedly in early September 1969 in village Rzhavchik Tisulskago district of the Kemerovo region. During coal blasting in the core a twenty-meter coal seam at a depth of over 70 meters, the miner Karnaukhov (subsequently died on a motorcycle under wheels KrAZ) found a two-meter marble casket amazingly precision mechanical work.

At the command of the head of the site Alexander Alexandrovich Masalygina (died in 1980. The official version is a stomach ulcer) all work was immediately stopped. Casket lifted to surface and began to open, hollow at the edges petrified from putty time). Not so much from blows as from exposure solar heat, putty turned into a clear liquid and flowed.

One thrill-seeker even tried her tongue (literally a week later went crazy, and in February froze at the door own house). The casket lid was fitted perfectly perfectly. For a more durable joint of the inner edge was bordered by a double face, tightly entering the fifteen-centimeter wall thickness.

The casket turned out to be a coffin filled to the brim with pink-blue crystal clear liquid, under the spring surface of which resting high (about 180 cm), slender, of unusual beauty woman – about thirty years old, with delicate European features and large, wide-open blue eyes. Thick dark blond with a reddish tint, the curls to the waist slightly covered the resting ones delicate white arms along the body with short, neat trimmed nails. 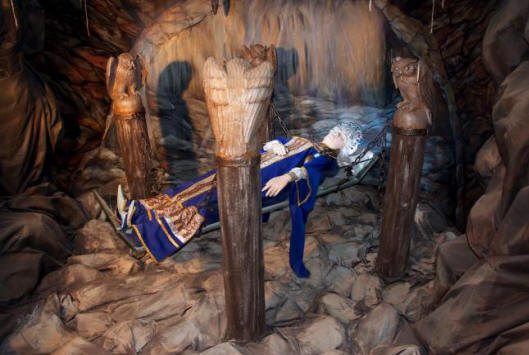 She was dressed in a snow-white transparent lace dress, long just below the knees. With short embroidered multi-colored flowers sleeves. There was no underwear. It seemed that the woman was not dead, but asleep. At the head – black, rectangular, rounded from one edges, a metal box (something like a cell phone), measuring approximately 25 by 10 cm.

The coffin was open to the public from about 10 to 15 hours. Look at the miracle was the whole village. Almost immediately about the find was reported to the district center. The bosses came in, firefighters, military, police. By 14 o’clock a brick color flew from the area a helicopter and delivered a dozen respectable “comrades” in civilian clothes who immediately declared that the place is contagious and ordered those present to depart from the coffin. After that, they cordoned off the place of discovery and copied all who touched the coffin and even standing close, supposedly for urgent passing a medical examination.

“Comrades” dragged the coffin, it was in a helicopter, but the burden was too heavy, and decided to ease the task by removing fluid. After pumping liquid from the coffin, the corpse began right before our eyes blacken. Then the liquid was poured again, and the blackness quickly became disappear.

A minute later, a blush flashed again on the cheeks of the deceased, and that’s all the body of the deceased acquired its former life-like appearance. The coffin was closed and brought into the helicopter, collected together with the earth the remains of putty in cellophane bags and ordered the witnesses to disperse. Then the helicopter soared up and headed for Novosibirsk.

Five days later an elderly arrived from Novosibirsk to Rzhavchik professor and lectured at the village club about preliminary laboratory findings from a recent find. Professor declared that this rusty find will turn understanding itself stories. In the very near future, Soviet scientists will publish the results of their research, and this will plunge the scientific world into shock.

Burial age, according to the professor, at least 800 million years!

Woman buried in the Carboniferous period of the Paleozoic era beyond millions of years before dinosaurs, long before they formed coal planet when, according to modern concepts, the earth still was a continuous plant kingdom. Original coffin with the body of a woman stood in a wooden crypt in the middle of a deep thicket the woods. Over time, the crypt has completely grown into the ground, collapsed without oxygen access for hundreds of millions of years has turned into monolithic coal seam.

The alien version was initially put forward, but the genetic analysis of a woman’s body showed her 100 percent uniformity with modern Russian man. Today we are one to one the same what our ancestors were 800 million years ago!

It is established that the level of civilization to which it belonged a woman exceeds all known so far, including ours, so as the nature of the fabric from which the princess’s dress is made is not amenable to scientific analysis. Technique for the production of such humanity has not yet invented material.

It was not possible to determine the composition of the pink-blue liquid, only some of its constituent components are identified, formed by the oldest varieties of onions and garlic. ABOUT except for a metal box, the professor said that she is being studied.

The lecturer left, and a couple of days later in the Tisulsky regional newspaper a tiny note appeared that found near the village of Rzhavchik an archaeological relic that will shed light on history. Rust protested – so many sensations, and in the newspaper three lines!

The outrage subsided by itself when the Tisulsky district was suddenly cordoned off by the military, police went into the yards, confiscating “seditious” number among the population, and the place where the coffin was found, thoroughly dug up and littered with earth.

And yet, despite the efforts of the authorities, among the inhabitants of the village there were fighters for the truth. One of the heroes went around all instances, even wrote letter to the Central Committee of the CPSU, but died a year later (according to official version for heart failure). When in during the year, one after another, all six were killed in car accidents “discoverers” of the coffin, surviving witnesses fell silent forever and ever.

In 1973, when, according to the authorities, “everything was quiet,” on the shores and the islands of Lake Berchikul, which is six kilometers from the find sarcophagus, all summer until late autumn in the strictest setting secrecy conducted large-scale excavations. Place of work was cordoned off by soldiers and police. But as they say: “The awl in the bag is not withheld! “….

Somehow, the visiting workers involved in the excavation and long kept quiet for a while, went into the district store, got drunk and let slip that the islands discovered an ancient cemetery of the times stone age. They flatly refused to give details, but that’s all the village saw how “brick” flew to the excavation site a helicopter and took something away, and upon completion of work on the islands and the shores of Berchikul remained hundreds of dug and carefully tombs covered with earth …