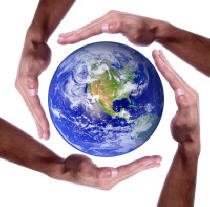 International Earth Day is celebrated today by environmentalists. Main the purpose of this worldwide action is to draw public attention to environmental issues. Today is not just big, but truly global holiday – International Mother Earth Day (International Mother Earth Day), sponsored by the UN, – day our common cozy home. The holiday was set on the 63rd Session of the UN General Assembly on April 22, 2009 (Resolution No. A / RES / 63/278, co-sponsored by more than 50 Member States UN) and is celebrated since 2010, annually on April 22. President of the 63rd session of the General Assembly, Miguel d’Escoto Brockman said the proclamation in the resolution of this International of the day is the recognition that the Earth and its ecosystems are our home, provide humanity with life, as well as reaffirmation of commitments made at the UN Conference on environment and development in Rio de Janeiro in 1992. therefore to achieve a fair balance between economic, social and environmental needs of the present and future generations need to promote harmony with nature and the planet Land. The resolution also notes that the term “Mother Earth” generally accepted in many countries that it reflects the relationship between planet, its ecosystems and man. Offering everyone UN member states, international and non-governmental organizations to celebrate “International Mother Earth Day”, The General Assembly draws attention to the fact that this holiday already annually celebrated in many countries. Tradition to celebrate 22 April Earth Day originated in the United States in 1970, in 1990 this Day has become an international stock. It has been celebrated in Russia since 1992. In the northern hemisphere, Earth Day is celebrated in spring, while in the southern hemisphere hemispheres – in the fall. The main goal of this worldwide promotion is attracting the attention of society and every person on the planet to problems of the Earth, to the problems of its environment. What is she like our earth? It is estimated that planet Earth is approximately 4.5 billion years. If you want to go around the Earth, walking along the equator, then there is a journey of nearly 40,010 kilometers. The distance from the surface to the center is 6378 kilometers. Moreover, really hard rocks (lithosphere) form a layer of only about 70 kilometers, and, moving further deeper, we observe semi-liquid and liquid states. Death Valley in California and a place in Libya, called El Azizia, hold records of the hottest places on The earth. El Azizia record – 57.8 degrees Celsius (September 13 1922), Death Valley record – 55.8 degrees Celsius (10 July 1913). And recognized as the coldest place on Earth Antarctica – July 21, 1983 at the research station “East” in Antarctica was recorded -89 degrees Celsius. Our Earth is incredibly rich in minerals – scientists already classified about 4000 types of minerals, approximately 200 of They are of practical importance. 50-100 species open annually minerals. Earth has one natural satellite – visible to the naked eye the moon. Mother Earth Day April 22, like Day Earth, held on the vernal equinox, provides an opportunity to each resident in all inhabited corners of the planet to express thanks to our great common home. Country scientists annually of the world are gathering this day at a round table for discussion global environmental issues. In different countries are organized a wide variety of events and promotions. These are conferences, exhibitions, traffic closure on busy large streets cities, cleaning the territory and planting trees. In Russia, traditionally International Earth Day is considered the day of public organizations, who conduct various environmental events on this day and stocks. On this day, everyone can participate in improvement and gardening of their yards and streets.