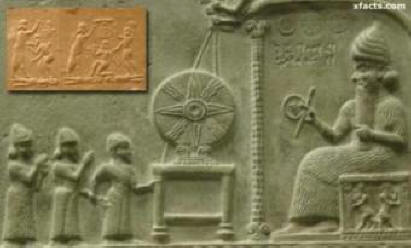 The northern neighbors of the Sumerians in Mesopotamia are Akkadians who created the mighty states of Babylonia and Assyria borrowed their gods at the Sumerians. Moreover – the Sumerian language has long been a language in which Akkadians created sacred texts and mythological tales though the Sumerians themselves by the second millennium BC disappeared, and their culture was swallowed by the culture of neighboring peoples. Before we got a huge poem about the creation of the universe, gods, earth and of man – Enuma Elish, recorded in Babylon for three thousand years back. This unique monument gives a complete picture of views of Akkadians on the origin of all things. Appear here completely new ideas that the gods, like people, there was a successive change of generations, with each the next generation of gods far exceeded power previous one. There are also majestic descriptions of the battles of the old and new gods. But the main goal of Enuma Elish is to explain why the Babylonian deity Marduk gained supreme power over other gods. Interestingly, there is a version of this poem, created in Ashur, the main city of Assyria, and in it the place of Marduk takes Ashur – the patron deity of the Assyrians. This manifested itself the desire of Akkadians to single out the main thing from the mass of ancient gods a deity – just like the power at this time completely goes to the sole rulers – kings. Dissected Goddess Tiamat is the oldest goddess of Akkadians. This is the embodiment of chaos, pristine element, creator of the first gods with whom she and had to join the battle. According to the myth, the god Marduk with his own hand, he divided the body of Tiamat into two parts, making one heaven, and from another – the earth. Most often this goddess was not portrayed in the form of a humanoid creature, but in the form of a monstrous dragon or seven-headed hydra. “Solar child” So called Marduk – god a new generation that combines the properties and power of many old gods. Marduk dominates people and other gods heaven, he owns all the wisdom, the art of healing, spells, commands water elements and vegetation. In addition, he is a courageous warrior, the only one of the gods who decided fight the army of Tiamat and the victor. For this he and gains the right of supremacy over the gods. So Marduk gains power not only by right of inheritance, but also by right of the strongest. Symbols Marduk served with an ax with a blade resembling a crescent and a dragon. Lord of the heavenly locks. Among the elemental deities, Akkadians especially worshiped Adad – god of thunder, winds, storm, responsible as disastrous, and for the fruitful forces of nature. He obeyed and floods and rains giving life to the fields. The Babylonians honored Adad in the image of a bull – a symbol of fertility and indomitable strength and rage. Most Ishtar was recognized as the great among the female deities of Babylon and Assyria – the goddess of fertility, love and at the same time feuds and war. Symbol Ishtar in the sky was the planet Venus, which was depicted as an eight-pointed star, and on the earth – a lion. This goddess was considered patroness of kings and women of easy virtue, with her cult associated with many strange and bloody rites. Ishtar is fickle and insidious, she often destroys her lovers – people and gods, therefore, the hero Gilgamesh, to whom Ishtar, according to myth, offered her love, answers the goddess with a sharp refusal, drawing on yourself her anger. Bas-reliefs and sculptures of the Babylonians and Assyrians always depict Ishtar with arrows behind him. In addition to the gods, Akkadians believed in a great many spirits – malicious and supportive of to people. These creatures were considered the children of the demoness Lilith, born of union with the first person. The word “go” itself means “shaggy.” Akkadians also believed that souls of people who led a dissolute and wicked life. Be that as it may, but with these “small demons” had to live in harmony, otherwise they were accepted in every possible way to harm a person, to send illness and misfortune to him. Most often, the shed was portrayed as people-birds or small winged bulls.