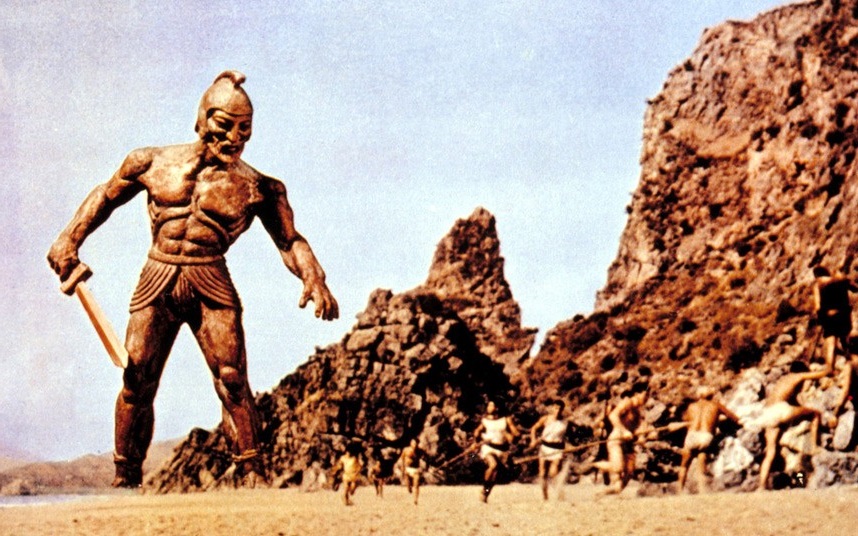 Most of us consider robots to be at least XX. century. Indeed, it was in the past century that they became permanent characters of science fiction novels and people are accustomed to the thought of soon the mass appearance of artificial creatures. But as for the appearance of the first robots, then perhaps the bar of their birthday is needed push deep into the past?

Even in ancient Greece, people dreamed of artificial slaves. You just imagine how such a slave is convenient: always implicitly obeys, doesn’t say too many words to the master, does not complain about life, does not ask for better working conditions, higher salaries, he does not need a social package and does not dream of secretly sticking a knife to the owner between the ribs.

And to create a battle robot, an invulnerable cold killer, whose one only “I will be back” would terrify the enemies – it was just the ultimate dream. The myth of huge brass Talos.

Zeus was born and raised in Crete. Loving the island, he gifted it to the inhabitants of the protector – a huge copper giant. Talos relentlessly patrolled along the coast three times a day bypassing Crete, one by his appearance scaring away uninvited guests. If which ship for some unknown reason, it was delayed during the raid (say passengers decided take a couple of selfies on the background of the giant), Talos broke off from the nearest the cliffs are a little slice and tossed it at the ship. Ate did not hit then the curious were lucky, but if they got …

But once Argonauts with stolen gold sailed past Crete rune. On the mountain of Talos, Medea was in the team of Greek adventurers. No wonder she is called a sorceress in the myth of the Argonauts. Beyond all doubt the girl possessed the knowledge and skills that outsiders seemed witchcraft.

She told Jason “everything will be OK!”, And then let go on giant’s dream. Argonauts creeping up to Talos at the prompt of Medea pulled out of his heel a nail that locked the circulatory system, the whole blood flowed out of the giant, he died.

In modern language, it looks like this: Medea introduced into the program the virus caused a malfunction in it, and the Argonauts quickly drained from mechanical-hydraulic system fluid. If the Cretans did not have a divine blood reserve tank or instructions for filling the hydraulic system with fluid, then the “corpse” of the giant could then be taken into scrap.

Talos was the creation of the fire god Hephaestus. Zeus, although he was a god, I could not make such devices. Rain, thunderstorm, pestilence on people let it in is welcome, but to create a working mechanism – here one divine power is not enough, you still need to be able to do something with your hands do.

To do this, Zeus was in the retinue design engineer Hephaestus. Exactly he was engaged in the manufacture of such little things, giving the boss approval of the finished drawings, and he only approved the project.

In addition to Talos, Hephaestus made robots serving the feasts of the gods. At the request of the Thunderer, Hephaestus forged several dozen artificial servants in the form of self-propelled tripods traveling between tables on small wheels. They were obedient not just verbal order, but also mental. (About such robots controlled by thought, modern engineers can only dream.)

It would seem, well, why are they to Zeus? Why couldn’t he take himself as mortal servants or some nymphs? But if imagine that this detail of the life of the gods was spied, all becomes easy to explain. Take with you on a trip to a ship where every square meter is expensive see area and each kg. cargo also service staff … you know, very expensive.

The talented engineer and himself did not forget. For personal consumption Hephaestus forged two gilded girls supporting the lame God while walking, entertaining him with singing and dancing, who owned all kinds of “female knowledge.”

This is also quite logical. Send on a long journey team and not think about how its members will solve problems loneliness is very, very cruel.

Are there only myths?

Smith Hephaestus and his artificial creations today clearly treated as myths. But looking at them in the eyes of a man of the 21st century, catch yourself thinking that the tales of the blacksmith’s creation are very resemble descriptions of real technical products. So maybe they were they really like that?