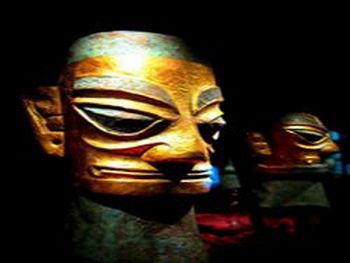 A photo from open sources Today it is known to the whole world that the territory of modern China in the late Late Neolithic and Bronze Age centuries, the Sansingdui archaeological culture flourished, which suddenly disappeared. From what?

And so, researchers of this phenomenon spoke at a scientific San Francisco conference with a new hypothesis to explain this the tragedy. In their opinion, the main cause of extinction Ancient Chinese culture became an earthquake. For example, Chinese scientist and geologist Nianian Fan believes that landslides result earthquakes blocked water sources for residents of that time, and because they were forced to relocate to other areas.

Sansingdui culture was discovered quite by accident at the beginning last century. Her remains were first discovered by a Chinese peasant, who, digging a regular gutter, found unique artifacts. However, the scientific excavations of this culture were carried out only in 1986, which resulted in the discovery of almost a thousand stone, jade, bronze and gold objects of the XII-XI centuries BC

All these treasures of Sansingdue Fortress City were broken and as if thrown in a hurry, which is why the hypothesis of a possible disaster. As modern scientists have proven, she really happened, but turned out to be not as mystical as suggested some researchers earlier.