The Temple of Truth is an impressive wooden structure on seashore in the style of ancient Thai architecture, filled with religious and philosophical meaning. The height of the temple is about 105 meters at the highest point. According to Internet sources – this is the most The tallest wooden structure in the world. It is created on the seashore, blown by all four winds and from afar seems like something fabulous and unusual. The building was built using ancient Thai knowledge. construction and wood carvings, each square centimeter of the temple – these are wooden carved sculptures and ornaments, harmoniously combining with each other and forming whole pictures. The purpose of this decoration is the use of art and culture as a reflection ancient vision of the earth, ancient knowledge and eastern philosophy. 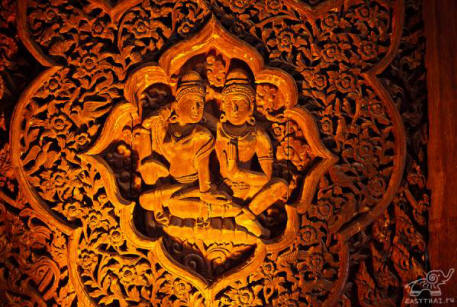 Philosophy of the Temple of Truth

From the time of the cold war to this day, the world has been under the influence of Western civilization is very strongly emphasized materialism and dedication to advanced technology. Many natural riches were destroyed, men forgot their destiny, thus, morality and spirituality ceased to matter for many people. Their attempts to control nature have turned people in selfish personalities who want to destroy each other through continuous wars and economic robbery. Most lives by consuming everything around, striving for personal happiness and Guided by the philosophy “after me – even a flood.”

The construction of the Temple of Truth was based on the idea that humanity has reached civilization thanks to religious and philosophical truths, which are the foundation for its development. This sanctuary was not created out of pride, but out of the kindest and the best that is in religion, philosophy and art. Man cannot be born and exist without the seven creators. IN Temple of Truth, these seven creators are presented as carved wooden sculptures that adorn it. These include: Heaven, Earth, Father, Mother, Moon, Sun and stars.

At the top of the four spiers of the sanctuary are four elements – four wooden sculptures that will lead to harmonious world in accordance with Eastern philosophy: 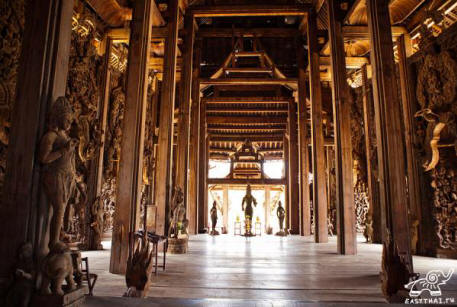 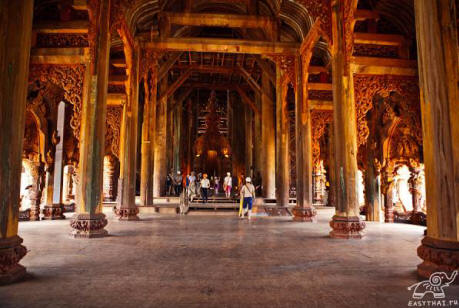 At the top is the central Kalaki spire with depicting a man on a horse, a symbol of Pra Sri Ariyamethai Pra (Ariyamethai Phra). Ariamethai was the last Bodhisattva, enlightened in the human world, and became the fifth Buddha in the era Bhadhra (Bhadhra), i.e., the modern era.

What to look for in the Temple of Truth?

These are tips and a short story about the main expositions (parts) Temple of Truth, worth a visit. Exposition 1: Temple of Truth People Can Visit to recognize the seven creators and four elements that will lead to perfect harmonious world for everyone personally or for everything of the world.

The steps that humanity must go through to find the perfect peace include the war between good and evil. The author of the art the work presented here depicts this through cut out on tree story of the Mahabhart and Ramayana. This story is intended to help. man in the struggle against desire and lust, and put out them.

Exposition 2: Wooden sculpture on the front of Mahisha Sura Mardini, an episode of Turag, defeating the Machings ogre, symbolizing ignorance defeated by wisdom. Wooden sculpture of parents in front, symbolizes them as creators, who give life to their descendants. Parental love is pure and immaculate. It is given, not expecting to be received, like water in a clear stream that refreshes the heart and soul. Kindness of father and mother more than sky and ocean. 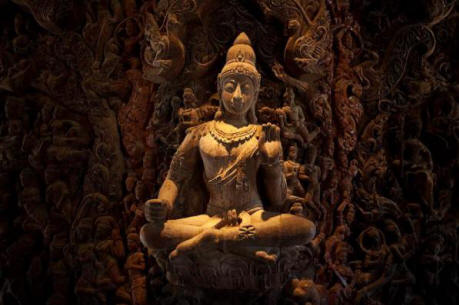 Exposition 3: Cut episodes from Krishnavatar, 8th reincarnation of Vishnu. They depict Krishna on their cow Vardhana, Krishna standing on the head of Naga, Krishna and the shepherds and Krishna on swing from Radha. In an episode of Mahabhart that tells of war between good and evil, Krishna rides on the chariot of the king of the Pandavas, symbolizing Good, which fights against Evil – King Kaurava. Before entering the battlefield, Krishna in conversation helped to find enlightenment to the king of the Pandavas Arjun. Arjun understood the cycle of birth and death, its essence and meaning. Subsequently, it became a teaching that called Bhagavad-gita, one of the most famous teachings Hinduism.

Exposition 4: Wooden sculptures depicting the gods the planet. These planets move in their orbits in the sky. They affect on all humanity and the course of life. The deities that control it movement, gods of nine planets. According to the old faith, the sun symbolizes honor and social status, the moon – honor and social status, Mars – courage and industry, Mercury – softness and kindness, Jupiter – wisdom, Venus – wealth and abundance, Saturn – unhappiness and misery.

Exposition 5: Wooden Sculpture of Chinese supernatural beings, including the Bodhisattva, in terms of Buddhist Mahayana, which is one of the two main branches Buddhism. 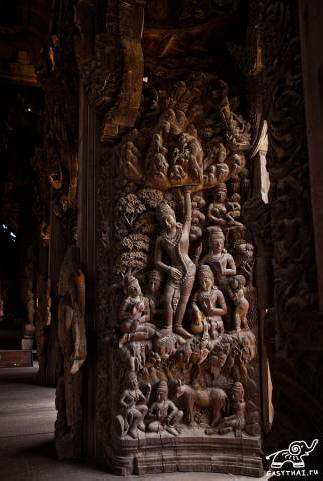 It is sometimes called the large wagon that carries people across the whole cycle of birth and death.

Bodhisattva is one who attains enlightenment and becomes Buddha, but refuses to reach nirvana, wanting to save people from suffering in the first place. There are countless bodhisattvas in Mahayana Buddhism such as Kuan Yin, Manyachusri, etc. Though they are born in various circumstances if they do good affairs and live a good life, can be freed from the cycle karma. The gods of these four elements are Brahma, Shiva and Vishnu.

Shiva, the god of the Earth, who is at the top of Mount Krailas and has a third eye in the forehead. When he opens his third eye, then everything what he looks at, burns down. Thus, he controls the fire. Vishnu sleeps on top of Ananta Nagaraj in the center of the milky sea. Is he – God of water. Brahma who rides a swan is the god of heaven and the wind.

Exposition 7: This work shows that people of art – only dust, and all of them will eventually become one with The universe.

Everything physical in this world is destroyed under the influence of time, but truth and goodness are immortal.

Material pleasures are superficial and deliver only external joy.

An ideal world is where all people strive.

Every faith, every religion and every philosophy leads there in different ways.

The four-faced Brahman adorns the transept in front of the pavilion. Brahma is one of the three main gods of the Hindu world. Brahma, Shiva and Vishnu are called Trimuarati. Brahma is self-created and is considered the creator of the rest of the world and all living things. IN Buddhism, the four karmas of Brahman include cordiality, kindness, joy and good luck and calm.

Reflect on the great issues of heaven and earth, yet live for humanity, learn and pass on to others exalted knowledge wise men of the past, and create an eternal peace for everything of humanity.

This is the true purpose and knowledge of great people striving for spiritual accomplishments.

From the pictures the temple looks very impressive! On its own the wooden structure is beautiful and unusual. 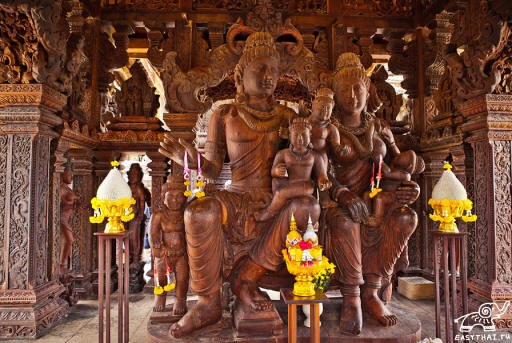 Photos from open sources The interior of the temple is divided into 4 halls, each of which belongs to one of the main religions Southeast Asia, although in principle, it is impossible to separate religions and in each room they are intertwined with each other. First hall Temple of Truth – cosmogonic beliefs. Philosophy Southeast Asian states that man cannot be born and exist without seven creators. Interior of the Temple of Truth gives us the opportunity to see 7 creators in the image of wooden sculptures. These include: Heaven, Earth, Father, Mother, Moon, Sun and stars. Also depicted here are the gods of the planets, each of which corresponds to the day of the week. They affect people and in the course of their lives. Knowing what day you were born, you can see which planet is basic to you. The sun represents honor and prosperity – Sunday; The moon represents honor and prosperity – Monday; Mars – courage and industry – Tuesday; Mercury – kindness – environment; Jupiter – Wisdom – Thursday; Venus – wealth – friday; Saturn – misery and suffering – Saturday. Each of sculptures symbolizing the planet represented by various variants of the image of Krsna. The second room is dedicated to beliefs. Hinduism. Here are episodes from Krishnavatar, 8th reincarnation of Vishnu. They are depicting Krishna on the cow of Vardhana, Krishna standing on the head of the serpentine being Naga, Krishna and shepherds, and Krishna on a swing with Radha. Sermon on understanding the cycle birth and death Is the main sermon of Vishnu and one of most famous Hindu texts. The third hall presents Chinese Buddhism. It is filled with wooden sculptures. Chinese supernatural beings, including the Bothisattva of Buddhism branch of Mahayama. Bothisattva is the highest attained person. wisdom, but refused to go to nirvana, and decided to stay among people to help them grasp the truth. Bothisattvas in Mahayana Buddhism is countless. Carvings The fourth hall shows that the world consists of four elements, earth, water, wind and fire. The gods of these four elements of Brahma, Shiva and Vishnu. Shiva, the god of the earth who is at the top the mythical mountain of the world of Crailas, he is the owner of the third eye. When he opens his third eye, what he is looking at burns out. So way, he controls the fire. Vishnu, according to mythology, sleeps in mid sea of ​​milk. He is the God of water. Brahma – is a god sky and wind. Here you can also see the four-faced Brahma. Brahma is one of the three main gods of the Hindu world. it immediately Brahma, Shiva and Vishnu. Brahma is considered the creator of the world and all Living creatures. In the center of the temple of Truth stands a wooden stupa. Here are the basics of Buddhism. Photos from open sources Total in the temple 170 solid columns made of huge trees. In Thailand they believe that in every tree a spirit lives, and when a tree dies – a spirit leaves him. According to the guide, here in the temple of Truth there is a column of giant tree that the spirit did not leave. Thais call this spirit Ta Kien and bring him offerings. The beauty of the temple of truth the guide tells that each wing of the temple of Truth contains images related to Buddhist and Hindu religions and the mythologies of Cambodia, China, India and Thailand, respectively. Of course, a person uninitiated in eastern culture and philosophy it’s difficult to make out, he sees more and absorbs beauty. But is she here? Statues are often out of proportion, assembled rude, supposedly antique, but looking at them, doesn’t even come in head draw an analogy with the sculptures of Angkor Wat or other Khmer images. It seems to be just a salad of statues and patterned thread. Interestingly, sabay-sabay writes about of this attraction: “Made entirely of wood and thinly carved, this building is filled with religious and philosophical truth and shows what human has achieved civilization “, – it is written in a handout. Really so. Some parts of the temple have already rotted for thirty years in the open, others are being built, others are being restored. Temple as a small copy human civilization. He does not represent a single religion, it is an attempt to combine the national and religious traditions of neighboring countries. “That’s how accurately and laconic the author described the meaning this structure, which is presented to eyewitnesses.