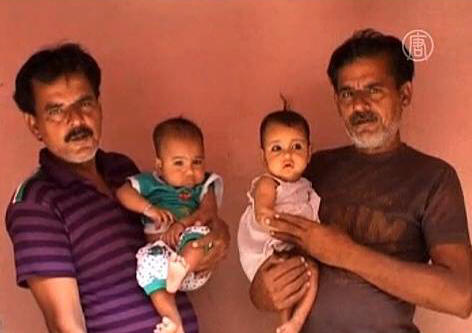 This seemingly unremarkable village Mohammedpur Umri, sheltered in northern India, as if born from “Comedy of Errors” by William Shakespeare. Funny situations, freely or involuntarily, it happens here, probably every day.

And how could it be otherwise if one sixth of the population are twins. Even local animals bring twins.

[Mohammad Mustafa, local]: “In over the past 25-30 years a lot has been born in this village the twins. At least 108 are currently living here. There are also many cows that have given birth. twin calves. ”

This phenomenon, it seems, is no longer anywhere in the world. So that, despite the fact that there is no first-aid post in the village and there is only one school, residents are still proud of their native places. Here even scientists came, hoping to uncover the cause of the unique phenomenon.

[Mohammad Hassan, local]: “All the twins in this village appeared as a result of the natural conception. There are many villages nearby, but there are no twins. Why only here so many are born? Many researchers came to the village, some even came from Hyderabad when Atal Bihari Vajpayee was the Prime Minister. They took soil samples and water in the village and the blood of the inhabitants for analysis. But they still don’t found the answer. ”

While scientists puzzle over the mystery, the twins from the village Mohammedpur Umri continues to turn the lives of his countrymen into scenes from a Shakespearean play. It’s rare which day here is dull. Then parents spank an innocent child for the pranks of his brother, then wife mistake the husband, the creditor cannot figure out who to take from data borrowed money. Some twin brothers even circled fingers of police officers, serving a sentence in a site in turn.

Parents, of course, are trying to find ways to make their twins distinguishable from each other. But more often it’s in vain, since many twins have similar names and dress the same way.