Lake Natron, a location in Tanzania, is not only one of the calmest and most saline lakes in Africa, but also serves the source of the most phantasmagoric ever made photos. In the pictures, the images of animals on the lake look like this, as if they were immediately petrified during their lifetime. 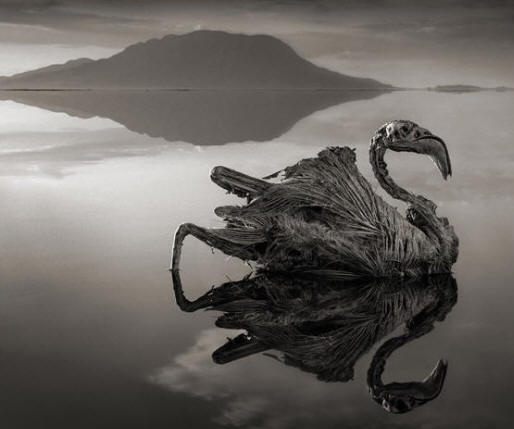 The popular photographer Brandt, who recently posted his unique works on the Internet, discovered the remains of flamingos and others animals in the relief of Cretaceous deposits of sodium carbonate. “I unexpectedly discovered strange dead creatures (all kinds of birds and bats) washed along the shoreline of Lake Natron, “writes Brandt, in his book. “No one knows for sure exactly how they die, but one thing is clear – the water is extremely saturated with soda and salt, so much that it can very quickly embalm the dead animals turning them into stone. I took these dead creatures which I found on the shore, and then placed them in “live” positions, in resulting in these unusual photos, “a series of which Brandt called Living in Death. The mysterious lake Natron has a depth of about three meters, the temperature of its water in some wetlands is equal to 50 degrees Celsius, and alkalinity can reach a pH of up to 10.5, so lake water can easily burn the skin and eyes of animals that are not adapted to such conditions. Sodium carbonate and others are responsible for the alkalinity of water. substances that flow into the lake from the surrounding hills. In the lake and near it are huge deposits of sodium carbonate, which once used in Egyptian mummification – it is he who plays the role of a fantastic preservative for dead animals in the waters of the lake Natron. In addition, Lake Natron due to its rich alkali supports the vital activity of the salt marshes ecosystem – the freshwater wetlands where flamingos live, other marsh birds, as well as tilapia and algae, which feeding flamingos. Also, Lake Natron is the only place in a world where small flamingos continue their race. During the season breeding more than 200 0000 individuals of small flamingos use small Lake Natron as a home. They build their nests on small islets that form in the lake during the dry season there but they also get food for themselves.