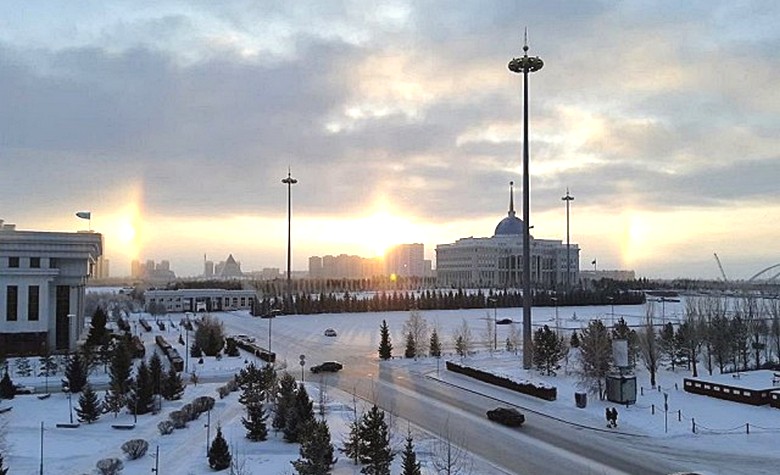 Yesterday morning, residents of Astana (the capital of Kazakhstan) saw in the sky three suns at once. Moreover, most of the witnesses observed this amazing natural phenomenon right above the residence of the president countries – Akorda.

According to the author of the above picture, to see this miracle personally it was much more interesting, the camera, no matter how cool it is was, still does not convey all the shades of this amazing heavenly beauty. Not to mention the feelings that at this time begin to overwhelm the soul.

Scientists explain such phenomena that periodically see something in one, then at another point on Earth, with ice crystals refracting light and creating such a striking illusion. By the way, this a natural miracle is called a “halo”, it is almost similar in some respects to rainbow, only in that multi-colored ribbon is created by droplets of water, and here a peculiar metamorphosis – by ice crystals, in which occurs, in scientific terms, the dispersion of light.

True, not all residents of the capital of Kazakhstan who witnessed flaring up in the morning dawn of three suns, so pragmatically appreciated this is an amazing phenomenon, many quite seriously believe that this some kind of heavenly sign for Kazakhstan, apparently, is kind, because it is connected with light and the main life principle for everything existing on Earth.

The arguments of scientists in this case do not work well, because even the rainbow seems to many not just a dispersion of light, because it manifests itself very peculiarly, moreover, for some reason, some people constantly see beautiful rainbows in the sky, even two and three-way, while others observe all this only in pictures and photos. For example, in this case, most residents of Astana did not even notice the three suns. And how to explain all this with scientific points of view? Accidents and coincidences? But isn’t it too our lives are many mysterious accidents and completely inexplicable coincidences? ..