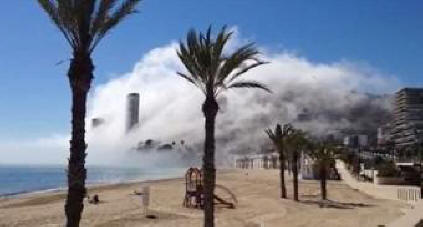 A huge cloud, as was recorded in the video, absorbed the main beach in Alicante, reports Daily Mail, UK. Event triggered concern among locals and holidaymakers, and prompted debate about the essence of the matter.

A huge white mass swept through the sands of the beach of Albuferet, obscuring everything in its path – despite the cloudless sky.

Some suggested that the cloud was smoke from a fire, and others compared the event to an apocalyptic scene when the cloud smoke from the explosions of thousands of firecrackers enveloped the neighborhood at the Las Festival Fallas in neighboring Valencia.

Tourists and locals from other coastal cities in eastern Spain also reported similar cloud masses in Calpe, on the Costa Blanca, and a popular resort Benidorm.

Meteorologists explained the phenomenon by the fact that the supposedly cold sea Meets with warm air masses of inland areas, in resulting in a huge cloud advancing on shore.