In the modern world, the Ankh cross is worn as an adornment to attract good luck, promote health or help in conception. This Egyptian symbol is very popular with magicians because it greatly enhances supernatural abilities and replenishes life energy.

Before you start wearing the Ankh cross, it is important to familiarize yourself with its meaning in different cultures, varieties, rules of use and activation. 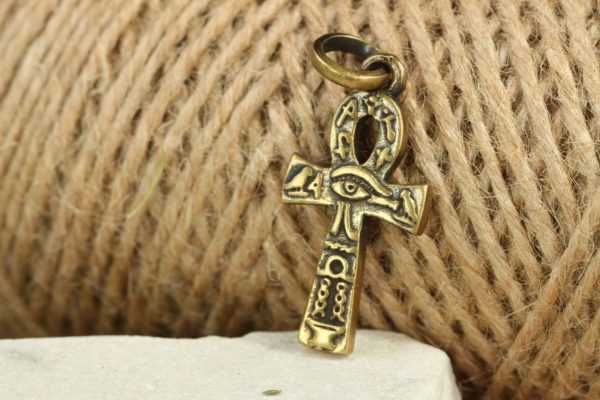 The Ankh Cross has been a sign of the Egyptian people since ancient times and symbolizes the continuation of life after death. Often, the symbol can be seen on images of deities in the decorations of ancient temples or tombs. In addition, he was considered a symbol of the king of the gods, who, with the help of the key of life, could open the gates of Paradise and continue life in another world.

The Egyptians believed that this amulet would help reveal magical abilities in its owner, enhance his creative potential and replenish internal energy.

The ancient Egyptian priests argued that a cross with one tip in the form of a loop not only opens access to the other world, but also allows you to establish a connection with deities and learn worldly secrets.

The Egyptian symbol Ankh has other interpretations:

The Egyptian cross denotes the king of the afterlife, Osiris, and the loop indicates his wife Isis, who is the goddess of children, women and illegally oppressed ordinary people, therefore the symbol also unites male and female energy.

Each part of the mark has an individual interpretation:

Today it is believed that the Egyptian figure in the form of the cross Ankh denotes a person. The circle is shaped like a head, the horizontal bar is his arms, and the vertical bar is his body.

The Egyptians used the amulet of the cross long before the birth and crucifixion of Christ, and it signified, in fact, the same thing as the cross of Christians today. Among Christians, the Ankh sign identifies sacrifice and death with the possibility of subsequent resurrection, the ability to learn the secrets of life.

How to use the Egyptian cross correctly

The Egyptian amulet in the form of the Ankh cross does not have the same effect on all people. In order for it to have a positive effect, you should adhere to some rules:

The first few weeks, the Egyptian Ankh amulet should be worn no more than a few hours a day, then the time increases every day. Initially, the owner may experience discomfort – this is due to the unity of the energy of the talisman and the person. Over time, the discomfort will disappear, and the strength will come to balance.

Expert Opinion Ilmira Derbentseva Parapsychologist Amulet Ankh is not recommended for weak-tempered people with nervous disorders – it is a powerful talisman that can aggravate the described condition.

After the disappearance of unpleasant sensations, the Egyptian amulet can be worn around the clock – during sleep, it can cause visions from past lives and open the way to new knowledge.

It makes no sense to hang an image of this symbol in the house, since it does not carry any magical protection.

The best time to activate the Egyptian cross called Ankh is a total eclipse of the sun, however, due to the rarity of this event, you can perform the ceremony as follows:

The Egyptian Cross Ankh will be successfully activated when the day is sunny and calm and the full moon shines in the sky at night.

If everything is fine in your life and you do not need anything, give up the image of such a sign on your body.

When applying a tattoo depicting an Egyptian Ankh, you should follow a few tips:

In Ancient Egypt, a tattoo with this symbol was often stuffed on the hand of a pharaoh or a priest – ordinary people had no right to decorate their bodies with such a cross.

Wearing the Ankh cross is allowed only with pure thoughts – this will save the owner from damage and help cleanse his own energy. When using the Egyptian amulet in evil deeds, it will not work or will take revenge on its owner, depriving him of strength and energy.