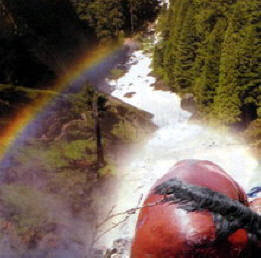 On the Colva River, 25 kilometers from its confluence with the Angara, once settled the ancient Siberian village of Karamyshevo. Years ten years ago it became a real Mecca for Russian ufologists, among which there were rumors of existence near the village black spot.

An almost round clearing, on which there was not a blade of grass, justified its name – Gibly. Here they found the last shelter cows, naively fleeing from numerous mosquitoes and horseflies in the open. Residents of the village said that even the birds that had the imprudence to fly into the clearing did not have enough strength cross her and they fell dead. Villagers step on the “damned” the land was feared. If cows died on it, then in order to to save at least meat, they threw ropes with hooks on the dead animals and dragged them out of the danger zone. You can eat meat it was without any harm, only it had a strange bright red color.

How can one explain such a striking effect of a small land on animals? About fifteen years ago, a candidate of physical and mathematical sciences Viktor Zhuravlev put forward an interesting hypothesis giving a realistic explanation of what is happening on phenomena. According to him, deep underground in this area are raging fires. Coal seams are burning. Formed by their burning carbon monoxide – carbon monoxide – rises along the cracks of the earth’s crust up until, finally, in some areas does not go to surface. Atmospheric air is enriched with oxide carbon. Once in the blood of the animal, the gas forms with hemoglobin relatively stable compound – carboxyhemoglobin, which gives blood and muscle bright red color.

The hypothesis expressed by Zhuravlev gave a scientific explanation and death of animals in a dead place, and a change in the color of their blood and the muscles. But still, we will not rush to agree with the opinion scientist.

A few years ago, the association “Aerogeology” conducted thematic works in the Angara basin. Geologists have decrypted satellite images, revealing them various elusive when ground routes large geological objects: faults, outer space-looking long straight lines the latest uplifts, giving in the pictures rounded and circular education. They reached the mouth of the Colva River. And here is what showed up.

Coal in the upper sections of the rocks of the Carboniferous period indeed there are, but its layers are too thin, and their number so insignificant that an underground fire cannot occur there. But the territory itself near the village of Karamyshev looks on space the picture is very strange. Kilometers 10-12 south of the village is clearly visible round structure, like a cross crossed out by two clear lines faults. The “black spot” really turned out to be abnormal not only for animals, but also for vegetation. After all, most of details “read” by geologists from satellite images, manifests itself on them precisely due to a change in the composition of vegetation or changing her appearance.

According to the head of the club of researchers of the unknown “Lamb”, candidate of geological and mineralogical sciences Egor Usachev, such a noticeable effect on all living things could happen only when simultaneous combination of two factors. Here, according to biolocation assessment of the topographic basis, one of “exits to the surface of the Earth of the axes of the crystal lattice of our planets. “Periodically radiated

in this section, the internal energy of the earth leads to oppression vegetation, and it is this phenomenon that contributes to satellite images of whitish rounded from north to south anomalies. The total energy impact on all living things is multiple intensifies precisely in the “black spot”, since here intersect at different depths, two powerful groundwater flows, spatially coinciding with faults identified by satellite images.

Water, as recent studies have shown, is a huge liquid single crystal, in which every second they break and arise molecular bonds, atomic chains are formed and destroyed again. By virtue of this, water is able to accumulate, store and carry information, including geophysical and biological fields, affecting living organisms. Therefore ubiquitous the confinement of various sacred places – ancient pagan temples, enchanted groves and hills, damn hillforts – to surface and underground sources is not accidental. Water greatly enhances the effect of both natural fields, formed by the radiation of the Earth, as well as artificial, induced a person arising in places of joint prayers of people, their mass death or burial.

It would be appropriate to recall the Chinese Feng Shui system, explaining the effect of the earth on man. According to this system beginning yin and yang, interacting with each other, give rise to l the vital energy of qi, or the destructive energy of she. On Earth, qi and she move through the so-called “veins” or “veins of the dragon.” Them are, from the point of view of modern bioenergy, flows groundwater and surface water, carrying information and energy, which, interacting with certain types of earth structures, give them positive or negative properties.

According to Yegor Usachev, a combination of special places of the Earth with powerful biofields and streams of water that enhance their impact, and is one of the mechanisms for the formation of holy and doomed places. An example is the glade on the Colva River.