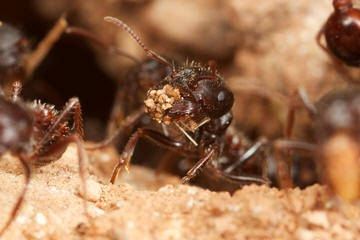 According to the results of a new provocative study, ants are one of the most powerful biological fighters for comfortable climatic conditions of the Earth. On average, ants live for about a year, however, their numbers are growing inexorably every day. Long term experiment “Tracking the behavior of insects on the soil” suggests that ants significantly cool the Earth’s climate. Lead author of this study, Ronald Dorn, is confident that ants significantly affect environmental changes. Dorn discovered that some species of ants secrete a mineral (calcium carbonate), better known as limestone, which perfectly absorbs carbon dioxide. The activity of these types of insects can be compared with small version of the massive planetary cooling process, known as “carbon binding” that occurs in the oceans. For comparison – today ocean limestone contains more carbon than our atmosphere. At the beginning of his career, 25 years ago, during an experiment, Dorn concluded that ants perfectly dissolve minerals such as calcium and magnesium silicate. This experiment was conducted on bare soil, peat and normal soil. For 25 years, this study was conducted on six plots of land in the states of Arizona and Texas.

Scientist carefully analyzed the composition of the soil under ant nests and found that insects can accelerate the process by 50, or even 300 times Conversion of minerals of calcium and magnesium carbonate! But what the most surprising: during this process of converting minerals into limestone from the atmosphere is absorbed by carbon dioxide. Dorn sure in this regard, ants can serve humanity great, since this carbon dioxide absorption method is much more efficient and safer than its storage in underground storage facilities. “In fact, we don’t know how ants manage to brilliantly transform minerals.

Perhaps the secret lies in the composition of their saliva may be due to bacteria living in the ant intestines, or maybe they are helped by fungi growing in colonies. This is a mystery at the moment, “says the scientist.” Clear one thing is that ants play an important role in changing climate conditions on Earth. “Dorn also focuses on the fact that ants appeared more than 65 million years ago, and over this period increased its total biological mass to the level of the total mass of people. Proceeding from this, for a given period of time, the ants did a good job, purifying our atmosphere. Most likely, and in the future they will help humanity to cope with global warming by removing from the air carbon dioxide and cooling the atmosphere of the planet.

Ecology, cataclysms, apocalypse 0
We will see global warming not only on thermometers, but also on his desk.

Ecology, cataclysms, apocalypse 0
Yamal holes – the result of the extraction of monstrous volumes of useful fossil
Leave a Reply Cancel reply
Recent Posts
Categories
Recent Comments
Archives
This site uses cookies to store data. By continuing to use the site, you consent to work with these files.