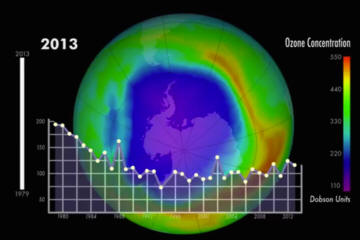 After a long depletion in recent decades, the protective the ozone layer of the Earth that is high in the atmosphere of the planet – on paths to recovery. Such data were published on the report. UN September 10, 2014 in New York. The report used the results of 282 scientists from 36 countries. Researchers believe that this was achieved thanks to a phased reduction emissions of harmful chemicals. “There are explicit signs of recovery of the ozone layer at the top of the stratosphere, “said a university professor in her speech Colorado A.R. Ravishankara speaking at the National Office Ocean and Atmospheric Research (NOAA). Ozone layer, located stratosphere at a distance of 15 – 40 km. from the earth, protects the planet from deadly ultraviolet radiation Of the sun. In the 1970s, researchers realized that gases such as freon used in refrigerators, aerosol cans and extinguishing fluids, lead to depletion of the ozone layer. IN 1985, the scientific community found a large “ozone hole” over Antarctica, and this stimulated measures to prevent its growth. Since 1987, nearly 200 countries have come together to ratify the Montreal Protocol which is intended to phasing out ozone-depleting substances. According to estimates scientists, if the Montreal Protocol were not signed, by 2050 the use of ozone-depleting substances would increase 10 times. Due to the fulfillment of the protocol, by 2030 will be prevented about 2 million cases of skin cancer annually. In the new UN report also highlights link between recovery the ozone layer and climate change. For example, some chemical substances that have replaced freons create a strong greenhouse an effect that contributes to global warming. To fight with a greenhouse effect, scientifically safe substances for ozone layer, as well as for climate and the environment. If countries will still abide by the Montreal Protocol, then the ozone level worldwide is expected to recover until 2050 however the hole above the South Pole is not likely to recover until 2070 – say scientists from the University of Colorado.

Ecology, cataclysms, apocalypse 0
A photo from open sources We will see global warming not only on thermometers,

Ecology, cataclysms, apocalypse 0
A photo from open sources Yamal holes – the result of the extraction of
Leave a Reply Cancel reply
Recent Posts
Categories
Recent Comments
Archives
This site uses cookies to store data. By continuing to use the site, you consent to work with these files.