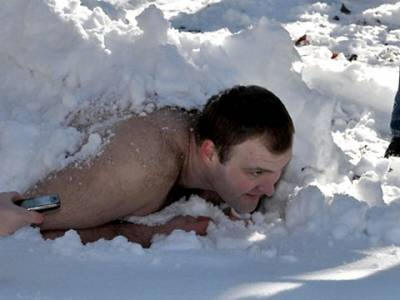 A resident of the Ukrainian city of Kolomyia set a world record for Staying Naked Man Under The Snow. Book Representatives records of Ukraine, deputies of the Kolomyia City Council and journalists recorded that Gutsulyak lay naked in a snowdrift for 1 hour 20 seconds, which is 20 minutes more than the previous record, which set the Japanese. The record was fixed on camcorder. – When I lie in the snow, I like Tibetan monks, I use the technique of meditation and imagine the summer, – shared with reporters with his technique Ivan Gutsulyak. – Of course, without constant training for so long in the snow is impossible. Moreover, hardening is good for the body and adds vitality and health. According to the representative of the Book of Records of Ukraine Anna Krysiuk, Kolomyia’s record claims the Guinness Book of Records. It is worth noting that in the last 2012 Gutsulyak lay in the snow snowdrift 34 minutes and 4 seconds and he was given only a certificate of the Book records of Ukraine.