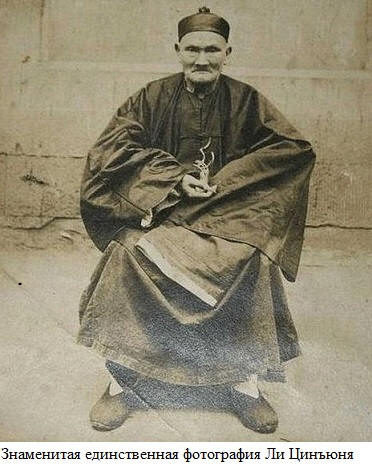 How long can a person live? Media reports of 100 year olds no one is surprised. 120? 130? 140? Li died in China in 1933 Qingyun, who at the time of his death, was 256 years old. An amazing meeting In 1927, the governor of the province Sichuan General Yan Sen met with famous herbalist Li Qingyun The meeting made a lasting impression on the general. IN The old herbalist quite seriously called the conversation the year of his birth. 1736. Without betraying his surprise, the general asked the guest tell the story of your life. According to Lee, he was born in the province. Sichuan, in Qijiangxiang. By the age of 10 he learned to read and write, which was then very rare, and set off to wander. Coming all over China spent several years in Thailand, Vietnam and Tibet. Studied everywhere herbs and their effects on humans. Served in Chinese army. After many years of wandering, he returned to his homeland, where he started collecting and selling herbs. He buried 23 wives, at the moment meeting was married for the 24th time. In total, he had 180 children. Many of the descendants still live next to him. According to the descriptions of the general, Lee had a youthful appearance, was strong, had a peppy step and good eyesight. A ruddy face and long nails on his right hand. Especially Yan Sen noted unusually tall guest height – 30 feet! (about 2 m) Goodbye Lee Qingyun allowed himself to be photographed. Searching for Truth-1 After the departure of the guest, the general ordered to direct Help about this interesting person. Professor Wu Chun Jian of Chengdu University found congratulations in the archives of the Chinese government Masters Lee with a 200th anniversary, dated 1877 and with a 150th anniversary, dated 1827 year. It turned out that the herbalist was not born in 1736 year, as he told the governor, and in 1677, i.e. 59 years earlier! But maybe these documents related to a completely different person? Not wanting to undermine the authority of a well-known herbalist with mistrust, general ordered to close the investigation. In 1933, Lee died in his the official was sent to the village to collect memories of fellow villagers about this great man, and unofficial – get to the truth. In search of truth-2 In the village where Li Qingyun lived and died, his age of 256 years did not cause anyone doubt. The most ancient inhabitants of the village since birth Lee was already remembered by the old man. And their grandfathers also knew Lee as a respected masters. No matter how far the official delves into his questions on a chain of family traditions, nowhere did Li Qingyun appear as a boy, a youth, or at least a mature man. In the folk memory respected herbalist lived since the creation of the world and already immediately in the image a very elderly person. Was Qingyun really more than 200 years or not, but the fact that he is many times older than any old man Sichuan province – it was not in doubt. Secret longevity According to fellow villagers, Lee never smoked, never consumed alcoholic beverages. I didn’t consume meat, I ate rice and always ate at the same time with herbs. Peel herbal decoctions, recipes which were known to him alone. He mastered the art of self-regulation body qigong. He got up early, went to bed early. Almost all the time spent in the mountains in search of herbs. He was generous, had a balanced character. In the village he was respected and loved. Lee himself is his secret longevity explained as follows: “Keep your heart calm, sit as turtle, walk cheerfully like a dove, sleep like a dog. Having ears yes hears. “As for the discrepancy in the date of birth, the problem is one of Lee’s descendants explained: “When the master last married, he deliberately “rejuvenated” himself by 59 years so that the bride would not consider him too old. ”