Just two years ago, a 21-year-old resident of Brazil looked completely normal and was no different from others. But some time ago he fell ill with a very rare ailment – so called “folded pachidemia.” 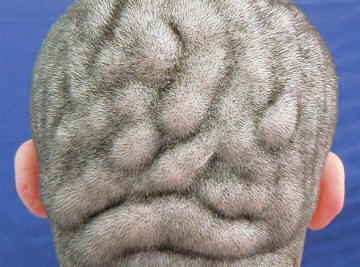 Now the skin of his head has acquired the shape of a brain: in the parietal and gross painful folds of skin formed in the occipital region, reminiscent of brain gyrus. However, the young man is not worried about his defect, he does not hide his head under a hat. is he even proud of his unusual skull. Most often, pachidemia folded occurs in men and usually develops shortly after puberty. The causes of the disease are still unknown. To improve the appearance of the head, you can make a series cosmetic operations. However, it is quite expensive. procedure.