The broken ghost is a very interesting and a mysterious atmospheric phenomenon that occurs mainly in mountains. If someone is at the peak or ridge, and at him at that time the sun shines, then the shadow of a person can be cast on clouds or fog on the opposite side of the sun. A shadow always seems incredibly large and often surrounded a colorful circle – the so-called gloria.

The silhouette can move, not only due to movement individual, also due to fluctuations in the density of water in the air and motion of cloud layers. A similar phenomenon has been described in English. writer Mine Reed in his famous novel “The Horseman Without heads. ” 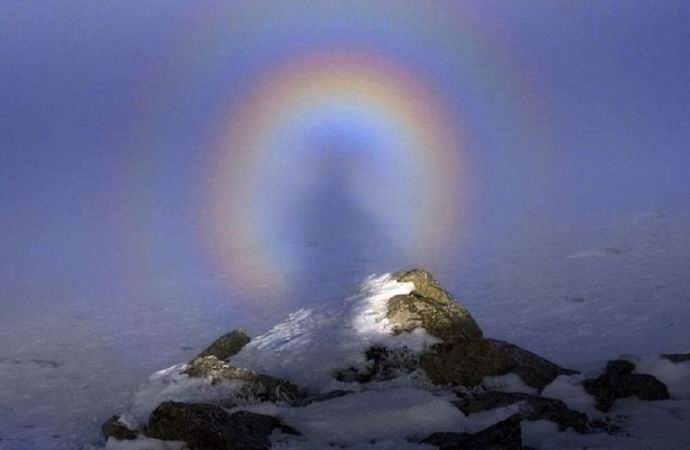 Such amazing shadows can be seen in many parts of the world, for example, in the Crimean mountains and the Caucasus, but its name the phenomenon was in honor of Brocken peak in the German Harz Mountains, where these ghosts are observed most often. Brocken, by the way, It has long been considered a place where witches celebrate every year. Walpurgis night, so in former times the appearance of mysterious many figures associated precisely with the activities of sorceresses and magicians.

The peak height reaches almost one thousand two hundred meters, while the average annual temperature here is less than three degrees Celsius, which creates extremely favorable weather conditions for the appearance of phantoms – fogs are observed on the mountain for almost three hundred days in year.

How does a broken ghost appear?

The Broken ghost arises when the sun shines on the climber, while in the mountains there is fog or is present cloudiness.

The human shadow passes through the fog, taking angular and bizarre outlines caused by perspective. Between man and the clouds can be many kilometers, so the shadow has huge dimensions, and its proportions often change, for example, lengthen arms or legs. Getting on water droplets scattered through the air, shadow can take on a three-dimensional appearance, inspiring observers with a real mystical fear.

Typically, a broken ghost is surrounded by rainbow rings. it occurs due to diffraction of light – the sun’s rays are refracted in droplets of water, scattering on the colors of the rainbow. 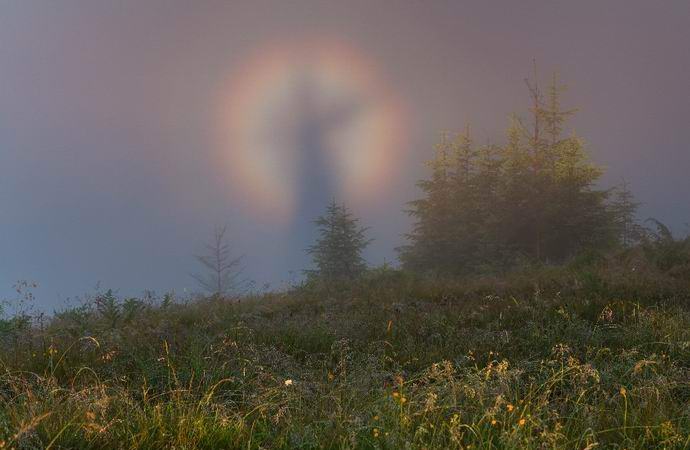 It’s noteworthy that not only people can cast such a shadow, but also animals, trees, structures, and even entire mountains. it the phenomenon is sometimes observed from an airplane window. If the aircraft located between the sun and the clouds, then its shadow framed by gloria, can be clearly seen below. 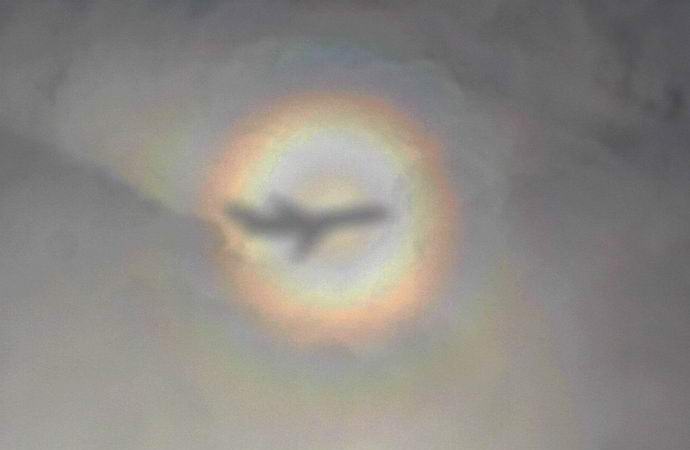 The likeness of a broken ghost can be seen if included in foggy night car headlights and stand in front of them. In the fog a large and voluminous human shadow will clearly emerge. 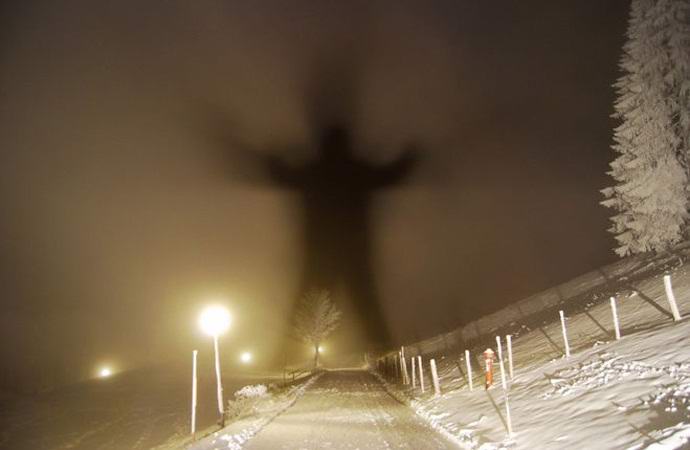 How was the broker’s ghost used to be?

It has been known about broken ghost since time immemorial.

For example, there is a medieval German legend about a shepherd, who, fleeing the robbers, rushed to the mountain. Caught on saving ridge of stones, he stopped to rest and noticed under clouds that made him shake with fear. Above the slope, going down, stood without touching the ground, a huge dark a man slightly obscured by fog. His feet sank into swirling clouds. 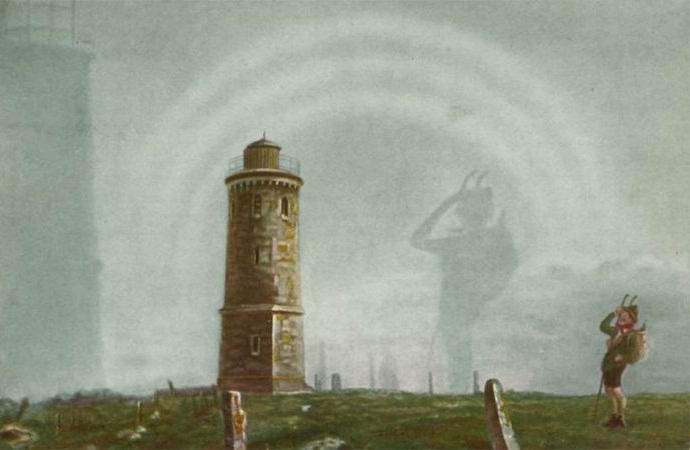 The man was surrounded by a halo resembling an iconic halo saint. The giant seemed to be significantly higher than the church, in which the shepherd prayed on sundays. The affected shepherd raised his hand and waved to the giant. He suddenly waved back. The shepherd was scared stronger than before and stepped back. A dark silhouette in the fog right there disappeared.

Now we perfectly understand that in this legend medieval Germans described an optical phantom, although they did not understand it nature. 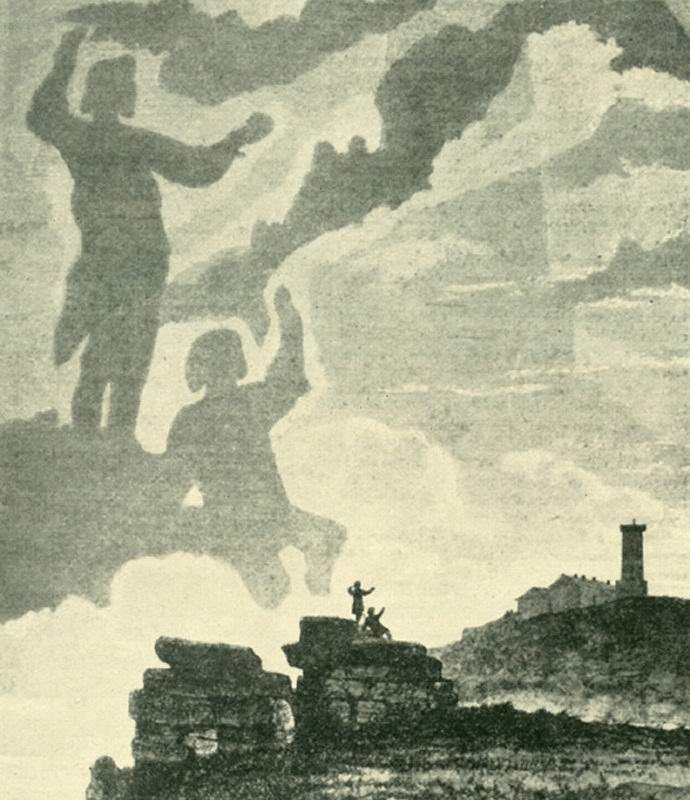 In the seventeenth century, Brocken Peak attracted the attention of German priests. The clergy considered what was happening on Broken unthinkable devilry, and strictly forbade fellow countrymen to rise into the mountains. However, it was worth the ban to enter into force, as gigantic human shadows ceased to appear to Germans. Not hard to guess, why.

And absolutely no mysticism?

Any specialist will confirm that broken ghosts real, but it will probably explain the phenomenon in the same way as we above. But is this phenomenon really limited to banal game shadows and a dispersion of light? 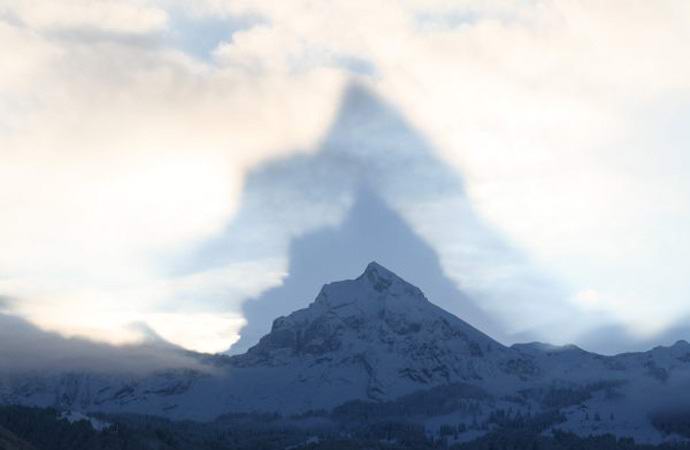 In the summer of 2004, the Italian tourist Andres Marchetti visited After that, Broken reported a strange observation. According to a traveler, he climbed alone to a peaked peak mountains and saw from there not one, but two human figures in the fog. The Italian felt that his shadow somehow bifurcated in haze, and began to make various movements to check his hunch: bounce, raise your hands up. However, the second the shadow did not move surprisingly, although it was located at all close to the first, as if someone else was next to Marchetti. Confused Andres, the beaten hour was inspected and even he shouted at an unknown person, but he never found anyone there. 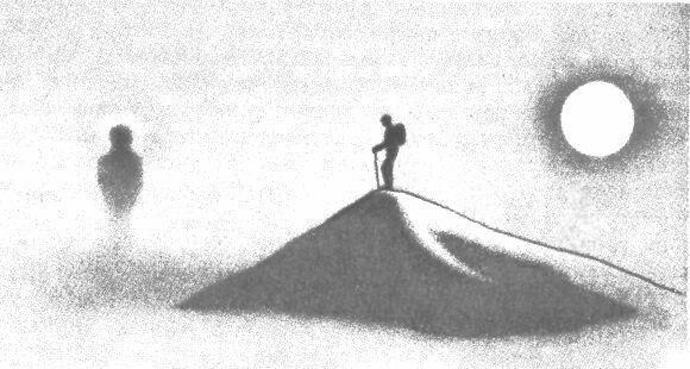 And in the fall of 2008, residents of the resort town Clausthal-Zellerfeld, located at the foot of Brocken, noticed in the fog above, a huge silhouette that looks like something wriggling a snake, not that on some creepy tentacle. Of course, surprised Germans asked a natural question: what could be on grief and cast such a shadow into the fog? ..