On the existence of “energy wells” in the territory the ancient city of Chersonesus has long been rumored. By visiting these sites, the author has witnessed an unusual phenomenon. Tauric Chersonesos, declared today a museum reserve, arose in the middle of the IV century BC and went down in history also under the names of Kherson and Korsun. Mysterious reservoirs are located near the ruins of Uvarovskaya a basilica discovered in the 19th century during excavations. As shown studies, the basilica with the temple and baptismal occupied a whole city ​​block. This complex of buildings, erected in the V-VI centuries and subsequently rebuilt, was a religious center medieval Chersonesos. The so-called “wells” are small round recesses in the soil, “edged” with a stone border. FROM on the south side of the basilica was a wide atrium courtyard with covered galleries on the sides and a fountain-violet in the middle. His skeleton surviving to this time, is considered by psychics “taking energy well. “Once adjacent to the eastern wall of the basilica baptismal center, in the center of which was a marble font. Presumably in its waters Prince Vladimir, the future, was baptized Baptist of Russia. (In memory of this event above the reservoir now a gazebo is installed.) The remains of the font are recognized as “giving energy well. “From ancient times, the circle shape had a deep meaning, it was connected with the cult of the Sun and the movement of celestial bodies. In ancient times this geometric figure was considered a symbol of perfection, eternity without beginning and end. Stones laid out around a circle, representing the oldest megalithic monuments, so called cromlechs, are found in different corners of the Earth, including including in the Crimea. 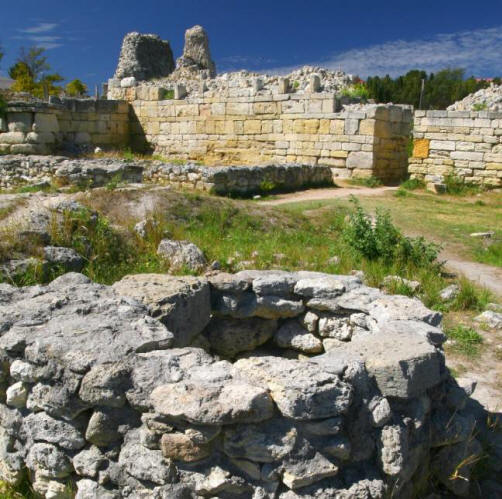 Photos from open sources Another symbolic figure of antiquity is an equilateral cross. Four cross-shaped “petals” decorated with stone The border of the former fountain. The baptismal building has the same shape in terms of and at the bottom of the font was a hollow in the form of a cross, now filled up. A cross inscribed in a circle, in our case, a font with a pattern at the bottom, embodies the unity of the spiritual and material, male and female, positive and negative. Among the many meanings of the cross – sun, eternity, spiritual rebirth. Looking around sights, we (I, husband and four-year-old son) could not help but “chat” with the mysterious “wells”. Approaching the tank taking away “bad” energy from a person, we stood on stone the “petals” of the curb extended their hands forward. Our offspring flatly refused to participate in the procedure and didn’t even want to take a picture. Soon, peculiar appeared in the palms sensations, but perhaps this is self-hypnosis? However, looking at my little ring (jewelry with a liquid crystal insert), I was puzzled. Usually, when putting on a finger, the glass of the ring had black color, then on a hand “warmed up” and became pale blue or light green. The final color of the insert depended on the heat of my hands and the temperature of the air. In in any case, falling into the sun or under a stream of hot water, crystals invariably brightened. But then, hovering on my arm over well, the ring blackened as if it were not on mine warm hand … 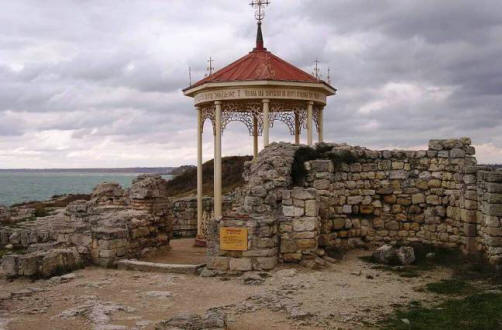 Photos from open sources Next we headed to the “well, giving energy. “Our child ran forward and loomed inside arbors – it must be this place, unlike the previous one liked I must say, this metal construction, crowned red roof, does not decorate the ancient ovalina, and makes dissonance in about, the face of Chersonesos. In addition, the metal is capable of noticeably influence the “work” of energy flows coming from the earth (if any really exist here). Entering the roof, we saw a son standing on the curb. I asked him to move away from the edge – this “well” turned out to be noticeably deeper than the previous one. Standing calmly a few minutes, the child suddenly fell down, and we did not even understand how this happened. From the deep abrasion on the chin still remains a scar. As we learned later, during such energy procedures should be located inside the “wells”, and not on the curb. Calling the mystic to help, you might think that the “well” is way wanted to show us how to “communicate” with him. The incident with my son made me forget about the ring for a while, and I I didn’t see if the color of the glass changed. When again turned her gaze to the ringlet, the insert again had the usual warm “decor” coloring. But why did liquid crystals react near the “pick-up well”, if we consider this phenomenon as physical phenomenon? Today found that the color change these substances are affected by an electric field, a change in temperature, chemical vapors Probably one of these mechanisms acted in “pick-up well”. Having made using instruments measurements, taking a soil sample, experts may have recorded would have certain physical phenomena. But here a new question arises – What is the reason for their occurrence here? To try to answer it, we invoke the alliance of geomancy – centuries-old science of terrain properties. 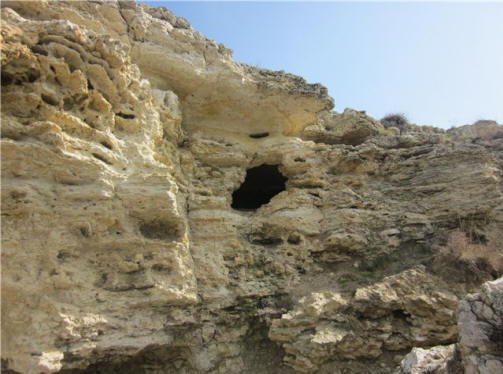 Photos from open sources Our ancient ancestors who lived in different corners of the planet, knew about the lines of terrestrial magnetism, and about the movement space tel. Using this information, ancestors clearly organized the space surrounding them – created a system of roads, settlements. Presumably such a “marking of the terrain” could be made back in the Neolithic era. Often crossroads of earthly energy streams were marked by special structures, now called megaliths. Heracles Peninsula, the tip of which is Cape Chersonesos also holds megalithic monuments of the Bronze Age and early iron. One of the elements of this type of culture are considered cave complexes for household and religious purposes. Them a lot in the vicinity of Sevastopol, one of them – in Chersonesus settlement. These are the remains of a cave temple not far from “wells”. Residents revered it until the last years of its existence cities. Often, when changing cults and religions, “holy places” kept the previous “residence permit”. Moreover, often new settlers or the conquerors included the local deity in their pantheon of gods, because it personified the “spirit of the earth”, that is, energy flows specific locality. In terms of geomancy, in planetary scale, lines of force divide the globe into equal sectors. how as a rule, intersections of such lines are marked by the oldest megalithic monuments or inexplicable today natural anomalies. Examples are Peru (giant drawings of the Nazca desert), Egypt (the complex of pyramids in Giza), British Isles (Stonehenge), Bermuda Triangle. One of energy grid nodes are in the Black Sea region, including Crimea. Based on the above theory, we can conclude that a certain territory of the peninsula is located in a certain zone energy activity. The surviving symbols of Kherson “wells” is a hint of eternal that has come down to us from time immemorial the movement of energy on this piece of land. Most likely a solution many secrets, making new discoveries will bring comprehensive using the achievements of modern science and ancient cultural heritage. Julia Belokobylenko