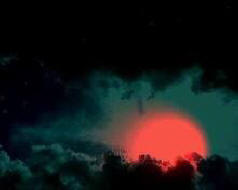 On September 18, 1938, the inhabitants of Siberia observed a strange and frightening phenomenon. “In the village of Nyda, there was a strong darkening, – wrote one of the eyewitnesses, botanist V.N. Andreev – It began in a cloudless sky. It seemed that from the southwest approaching some veil covering the sun. After that, the sky turned into brown and blood red tones, soon replaced by darkness, held for more than an hour. By 10 o’clock the last remnants of the world had disappeared. By 10.30 a black night fell … Heaven and earth did not differ from each other friend in lighting and coloring: everything seemed uniform, black, completely devoid of light. “Geography VN Boldyreva darkness found on the bank of the Ob. He subsequently wrote that the bright light of the clock polar day faded at eight in the morning. The clouds took a yellowish shade, then turned blood red. Sudden darkening surprised and scared the locals. Lights were lit in the houses. People went out into the street, anxiously looking over the formidable darkening sky. The clouds as if pouring in black ink, they absorbed the remnants of the light. Has arrived absolute darkness.

The screams of frightened people mixed with the howling of dogs. The darkness has thickened so that at a distance of several steps were not distinguishable even bright objects. By noon in the northwest a narrow a strip of brownish-orange color, but after an hour it disappeared, and the earth was again shrouded in haze. Only in the first hour of the day began reddish-brown dawn, and the unusual phenomenon is over. “blackouts” swept the space from South Yamal to Igarka. A huge part of the interfluve of the Ob and Yenisei plunged into darkness 250 and up to 600 kilometers long. “What could have served opaque environment, where and under what conditions appeared, it remains a mystery, “said V.N. Andreev.

The famous scientist Peter was one of the first to tackle this riddle. Dravert. Before the war, in the magazine “Omsk region” appeared his article “The Cosmic Cloud over the Yamal-Nenets District”. “We must remember that along with entities such as stars, planets and their satellites, one of the forms of matter in the Universe is cosmic dust, – wrote Pyotr Lyudovikovich, – One of the clouds cosmic dust September 18, 1938 crossed its path with The earth. This created a powerful barrier, eventually stopping access of sunlight to the Earth’s surface over a vast area. IN areas where less dense areas were located above our planet clouds, the sky was orange, yellow-brown, blood red colors. Where clusters of cosmic dust were most dense, there was hopeless darkness. “Scientists decided that the secret “Siberian haze” and other “unexplained eclipses” disclosed. Georgian astronomers from the Abastuman Observatory discovered in the atmosphere at different heights extended dust accumulations. At sensors using the Electron-1 and Electron-3 satellites found that cosmic dust is not distributed around the earth evenly, and in the form of separate seals moving along their orbits.

When the Earth encounters such a seal on its way, cosmic dust falls out in large quantities. However, the amount the dust that eclipsed the sky above Yamal clearly went beyond the usual framework. Radio astronomer Alexei Arkhipov suggested that this and others “eclipses” were caused by the decay in the upper atmosphere of some loose cosmic bodies. According to Arkhipov, sources of space Dust are microcomets discovered in recent years. However experts from the University of Iowa calculated that every minute in up to 20 microkomet weighing 20-40 tons breaks up in the Earth’s atmosphere! Every day, more than 25 thousand such bodies fall on us, but “eclipses” still not happening. So the reason for the appearance of dust is still unknown bodies orbiting the Earth. Alexei Arkhipov calculated that “extracurricular eclipses” do not occur randomly and regularly – with periods of 9.4 and 30.7 years. We have time to prepare and finally find out what immerses the Earth in darkness…