On the territory of the Kronotsky Reserve (Kamchatka) there is not even valley, and so, bald place 2kmx250m. No trees grow here, no even herbs. Only the corpses of birds, small animals on stones. There are also bigger – foxes, bears. This is Death Valley. Really here nothing lives.

A strange place, covered with corpses of animals, was found in 1975. Volcanologist Leonov and forester Kalyaev. Both were struck by the sight of this dead places. In addition to numerous birds and small rodents in the hollow lay dead lynxes, wolverines, foxes, bears. Of course curious scientists could not pass by such an interesting place. For Research even built a house near the baleful valley. 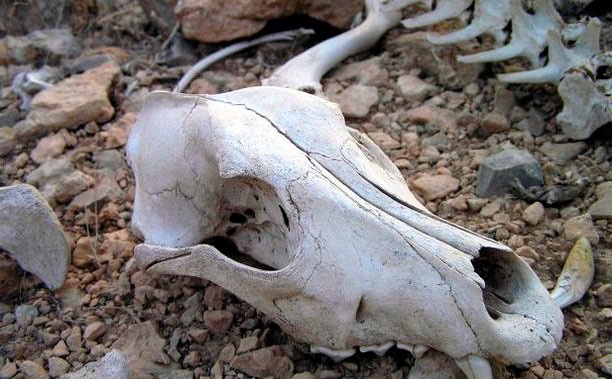 Work could not give results. Work mechanism opened “conveyor of death.” The first to die were small animals: birds, rodents. Larger predators went to feast on them – foxes, and also remained here. Then the “wolverines” went “to the table” – and also perished. So the valley became a cemetery. But what was the cause of death?

Among the numerous samples (land, water, etc.) the most interesting turned out to be air samples. Analysis revealed strong concentration carbon dioxide and especially hydrogen sulfide (stones in the valley are simply coated with sulfur).

Everyone remembers that Kamchatka is the region of unprecedented seismic activity, country of volcanoes. The geyser valley is located in Kronotsky reserve. There are no geysers or thermal springs in the Death Valley not. But in the depths a volcanic cauldron boils, throwing through cleft deadly mixture. In a hollow sheltered from the winds, gases gradually accumulate and the animal that gets here dies in a matter of minutes. Although in the press there are numerous stories about hundreds of dead in the valley of hunters and scientists, actually human victims since the discovery (1975 year) is not fixed. Of the researchers working in the valley, not nobody died. Of course, staying in the valley for people did not pass without a trace: headache, weakness, dizziness, fever, but all quickly passed when a person went on ventilated space.

True, somehow one scientist, bending down, fell directly into the stream escaping gas and could well open a sad list. But nearby comrades carried him out of the poisoned zone, and the valley was left without a human sacrifice.

But carbon dioxide and hydrogen sulfide were not the only ones means of killing the valley. In 1982, scientists found that sometimes through crevices in the valley, chlorocyanine vapors break out. This gas deadly even in minimal quantities and in World War I used as a chemical weapon.

Large animals (wolverines and bears), “slurping” of chlorcyan, even having managed to get out of the valley, then they died anyway. Their dead bodies are scientists found a few kilometers and previously long puzzled that killed a beast who had already left a terrible place? It turns out they were killing poisonous chlorcyan.

So, not a single riddle in the valley? How not to be! Among researchers found numerous corpses gnawed to the bones remains. So there’s someone in the valley and alive? Isn’t she so lifeless? But who and most importantly how manages to survive in Death Valley? There you have a riddle.