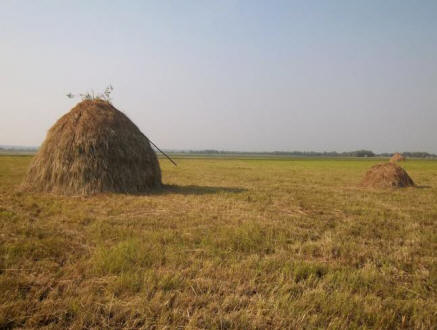 At the beginning of the 20th century, a sorcerer lived in our village – the old man Pereverzev. He did not seem to do evil to the villagers, but nevertheless they feared him. Offenders he quickly put his people in place once and for all: then livestock in the yard didn’t go to them, then suddenly such a person’s holiday flux face warps … However, Pereverzev was a man liable: apologized to him, repented – and all the misfortunes right there stopped.

The villagers did not cease to be amazed at the sorcerer’s abilities. For instance, his cow herself left the herd at noon, came to his yard milked, and then she returned as well. Somehow my neighbor she said that once in the winter, when she was a girl, she and girlfriends sat at home and ate pickles. Here for no reason icy water gushed out from beneath the wall. Girls lifting their skirts in horror climbed onto the table and benches. And suddenly the sorcerer laughed. It became clear That it was Pereverzev so joking.

But once there was one case after which the people of the sorcerer truly respected.

Our village stands on the high right bank of the Don, it is crossed seven ravines, and how many of them in the surrounding fields, generally not counted. Therefore, haymaking for residents has always been hellish labor. People there were many, three thousand people in the village, and therefore had to mow not only in the pasture and in the ravines, but even in the meadow that was in 25 kilometers from the village, beyond New Kalitva.

Home from there hay was carried on horses and oxen. During the summer, Of course, they didn’t have time to transport everything, so in the meadow winters were stacks. Hay was protected from the extortion as much as they could. But only the sorcerer Pereverzev, who also had stacks there, never had them guarded. For his good, he was calm.

And then one fall, the thieves decided to take the stack of Pereverzev. That evening, when they were going to do their dirty deed, Pereverzev suddenly said to his grandmother:

– Prepare a good dinner – there will be guests. He himself opened the gate and prepared forks. At midnight, a cart loaded with him drove into his yard hay. The men jumped from her and fell on her knees in front of the sorcerer.

“Nothing, guys, nothing,” Pereverzev answered. – you are good have worked. Now here take the pitchfork, fold the hay here and go supper.

After dinner, the owner saw thieves from the yard.

“And look,” he said goodbye, “if you see a stack, cattle untouched, better bypass it!

When then the thieves were asked why they came to Pereverzeva, they replied that they had no idea where they were going. Before they had only one road and it turned out impossible to turn off it. Fire and water were raging everywhere and they didn’t give a move either to the right or to the left, not back. Only forward!

The sorcerer Pereverzev had no children, only one niece. I I remember this old woman, she lived on our street with relatives, never quarreled with anyone, treated people in their own way from fear, barley, evil eye, warts and so on. They said that uncle wanted her transfer her strength, but she failed to pass the test. When a niece went to him to get strength, she was accompanied by a howl, whistling, laughter, neighing, laughter, hissing. She should have passed without looking back, but could not stand it, stopped and looked around. Behind nobody not turned out. Uncle then said to her:

– Quite a bit has passed. Strength will be, but small.