Man has always been attracted by the hypothetical ability to fly without help of any kind of aircraft. People about it dreamed, composed fairy tales, passed from mouth to mouth legends about flights … But are they really such legends, or is history really knows cases of flight without the help of instruments – the so-called levitation?

To begin with, we all – without exception – fly in a dream. Dreams about flying are thought to appear when the body releases hormone responsible for the growth of bones and skin cells. At the same time on poetic question “Why do people not fly like birds?” the science gives a definite answer: “The reason is the gravitational pull of the Earth. Only by overcoming gravity will a person be able to rise in air”.

The founder of aerohydrodynamics N. Zhukovsky wrote: “Man will fly, relying not on the strength of muscles, but on the strength of his mind. ” Handsomely! Aphorism became the motto of the first conquerors of the Fifth Ocean. The phrase implies that a person can overcome the force of gravity thanks to the development of science.

However, the “father of Russian aviation” did not even suspect how much was close to the truth! It’s about a person’s ability to levitate in the moment of complete liberation of the brain from its “clogging” external and internal information. And although such virgin purity it seems completely unbelievable, facts are a stubborn thing.

For example, in different parts of the world, evidence of more than two hundred saints who at the time of the religious trance or ecstasy ascended above the earth. Among them is the “flying monk” Joseph Desa (1603-1663) from the Italian city of Copertino (over 70 levitations documented by then scientists and reigning persons), Carmelite nun Saint Theresa, who spoke about an unusual gift in her autobiography (1565), Ignatius Loyola, Saint Adolfus Ligori, as well as the famous Carmelite sister Maria. Contemporaries of Jeanne d’Arc told that in childhood she sometimes voluntarily flew up in front of her eyes girlfriends. And when she matured, many began to pay attention to her unusually smooth and light walk: as if she did not walk on the ground, but soared above her.

Of the Russian Levitants, we can call the Monk Seraphim Sarovsky, St. Basil … And officially recognized by the church Levitants do not include witches. How many burned them At the stake, the Holy Inquisition, can not be counted.

One of the most famous Levitants is Scot Daniel Douglas Hume (1833-1886). World-famous scientists have recorded hundreds of it levitations. But he is far from the only one who perplexed scientists. So, in 1934, the Englishman Maurice Wilson, for many years trained in levitation by the method of yoga, decided huge jumping, flying above the ground, to conquer the summit of Everest. His a frozen body was discovered in the mountains the following year. To the top Wilson did not “fly” quite a bit. But what he was able to overcome the most difficult route without special climbing equipment, speaks in favor of levitation.

But most often, cases of levitation were seen in the East. IN Unlike the Eastern Levitants, the Western did not specifically master the art of levitation and did not prepare for flying. Usually they soared into the air, being in a state of enthusiastic religious ecstasy and not even thinking about it. Oriental is all his life subordinated to the art of controlled flight. 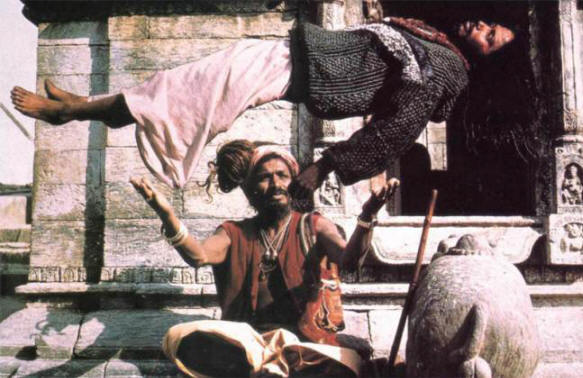 In the East, yogis, holy hermits, and brahmanas and magicians. In the Indian Vedas, which is literally translated from Sanskrit means “knowledge,” even practical Levitation Guide, a kind of know-how that describes how to bring yourself in such a state as to take off the earth.

Along with India, levitation in ancient times was also practiced in Tibet Buddhist texts narrate that, after in 527 Indian founder came to Shaolin monastery Bodhidharma Zen Buddhism, he taught monks to manage energy bodies – an indispensable condition for flying. We used levitation and Buddha himself and his mentor magician Sammat, who could spend hours stay hanging in the air.

It is characteristic that in both India and Tibet the art of levitation preserved to this day. Many oriental scholars also describe the phenomenon of “flying lamas.” For example, british traveler Alexandra David-Neel watched with her own eyes as one of the Buddhist monks on the high plateau of Chang Tang, sitting motionless with legs bent under him, flew dozens meters.

Currently the biggest levitation results achieved by those who use the technique of yogis. For a long history era of loss of knowledge and era of ignorance much of this technique turned out to be lost. But part of the secret knowledge is still preserved. One of their keepers was the Indian guru Davy. Became his student Our contemporary, a young physicist. In 1957, moving to the United States under in the name of Maharishi Mahesh Yogi, he spoke as a preacher of the new philosophical and religious teachings of the Science of Creative Mind.

Its cornerstone is the transcendental consciousness, which not limited by any framework and can receive information directly from the outside world and from the universal mind, and not just through the senses. Maharishi claims that the ability to levitation is inherent in everyone, you only need to learn how to use by her.

The first competitions were held in Washington in July 1986. “flying yogis” trained by the transcendental program meditations about which the press wrote a lot and films were made. Though the results shown by the participants are incomparable with those that have reached us descriptions of cases of levitation in the past, they can certainly be considered quite impressive: a rise of 60 cm in height and 1.8 m horizontal movement.

True, to call flights what the “flying” demonstrated yoga, “it’s impossible. Rather, it’s only short jumps: motionless a person sitting in the lotus position suddenly suddenly rises into the air, on hangs motionless for some time, and then just as smoothly is landing. But at the sixth competition of “flying yogis”, held in 1993 in The Hague, Subha Chandra excelled, rising above the ground by a maximum of 90 cm, flying over horizontally 187 cm and remaining in the air for 3-4 minutes.

What is levitation – randomness or regularity? Despite numerous cases of such flights, it is perceived as a miracle or at best as a mysterious phenomenon bordering on science fiction and contrary to scientific laws. And this assessment is not will change until an answer to the main question is found: What is the nature of the force that lifts a person into the air? Does it arise in the body itself through the mobilization of some internal reserves, its unknown, hidden capabilities, or its the source is outside the person and it only “connects” to him?

Judgments about the physical nature of levitation are highly controversial. A number of researchers believe that levitation results from the appearance of a biogravitational field, which is created by a special mental energy emitted by the human brain. Many serious scientists until recently spoke about levitation and antigravity very sharply in the spirit that all this is “bullshit.” Now im you have to reconsider your position.

It all started with the fact that in March 1991 an authoritative scientific Nature magazine published a sensational shot: director of Tokyo Superconductivity Research Laboratory Perched on a Dish from a superconducting ceramic material, and between and a slight gap was clearly visible on the floor surface. Weight the director along with the dish was 120 kg, which did not stop them soar above the ground! This phenomenon was later called the “effect.” Meisner. ” 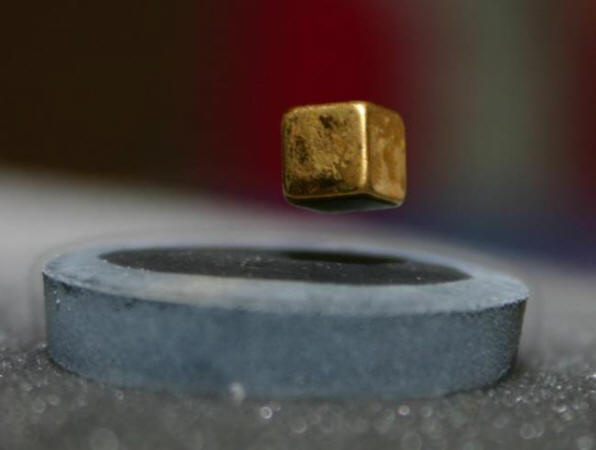 Of course, one cannot call this levitation yet. However it is an experiment can help uncover the mystery of the Levitants – in the case if it is proved that living objects hang in the air explained by the activity of cellular processes.

Studying the issue of levitation, scientists could not help but wonder: if a person is in a state of religious trance or ecstasy, can fly, i.e. to overcome the gravitational pull of the Earth, Does this mean that the doctrine of gravity is untenable? Complicated question…

In the East they teach: in order to achieve a state of levitation, a person obliged to lead an ascetic lifestyle. Before you commit levitation, an adherent for several days must observe fasting, and then perform a series of specific exercises, the purpose of which is “awaken the snake” and raise the energy of kundalini along the spine: from the lowest chakra to the highest. Adept in the long process meditation first achieves harmonization of the frequencies of the chakras located in the head, resulting in a complete release of the brain from all kinds of external and internal information, i.e. shutdown mind.

Then gradually, starting from the lowest chakra, mentally goes to the chakra with a higher frequency and harmonizes them frequency. Having reached agreement, the adept mentally proceeds to the next chakra, and so on, until it leads to the single meaning of the vibrations of all seven chakras. At the time of achievement the harmonization of all frequencies in the adherent comes a state of enlightenment, and he is able to fly inside his aura.

Scientists whose consciousness is not blocked by standard knowledge go in his reasoning even further. Christopher Dunn, engineer and researcher, so argues about this question: “What is antigravity? In my understanding, this tool, using which objects can rise, overcoming Earth’s gravity. we apply anti-gravity methods every day. When we morning get out of bed, we use antigravity. Airplane, rocket, forklift and elevator – technologies invented to overcome effect of attraction.

To create an anti-gravity device, you must to understand what constitutes gravity as a physical phenomenon, and based on this, use technologies such as creating out-of-phase gravitational waves that neutralize gravity Of the earth. The nature of gravity is still eluding us. But probably, this concept is too complicated! What if there is no such thing as gravity? And the natural forces that we already know are enough to explain the known phenomenon, which we designated as gravity? ”

Perhaps this approach will help to penetrate the secret that we call levitation. 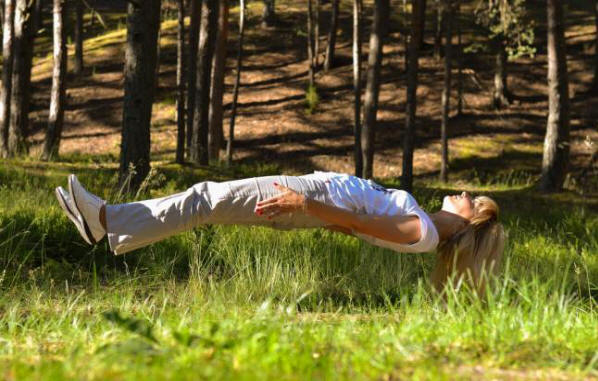 Scientists with an even more unbroken consciousness walk in their explanations of the phenomenon of levitation even further. For example, professor Eric Bergoltz from the USA is convinced that the modern human race is descendants of aliens, and it was from them that people inherited the opportunity to overcome the bonds of gravity. The main thing is to wake up the gene memory, and then levitation will not seem out of the ordinary, then each of us can easily fly into the air and fulfill the dream of his childhood: fly not only in a dream, but also in reality!

As happens almost always, the truth is somewhere in between, between science and religious identity. In this case, on the junction of different sciences. Probably not far off is the day when philosophers, scientists and engineers will stop arguing, gather and analyze the rich heritage of the ancestors. And they will certainly find ways overcome gravity and teach us how to fly.