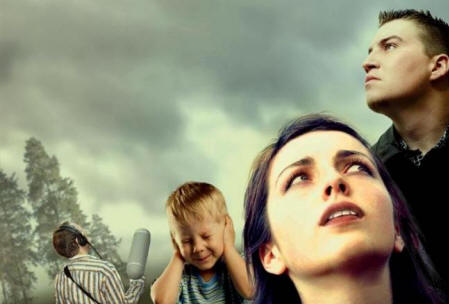 If you hear some sounds that others don’t hear, the doctor in the clinic throws up his hands in surprise, do not rush to contact to the psychiatrist. Perhaps you are just one of the so-called “Hamer”. Ham (Hum) – the so-called steady buzzing noise, observed in certain places of the planet, and heard only few people. They first talked about him in the 1950s, when from different places began to flock people’s complaints about uniform incessant buzz. Since then, scientists have practically not budge in the study of this unusual phenomenon. Little is known about him. This noise is pulsating or uniform annoying low-frequency buzz, reminiscent of the sound of work diesel engine idling. Hamers complain of a headache nausea, dizziness, nosebleeds, and sleep disorders. At the same time, sound is more often heard in rural areas, and at night amplified.

Mysterious noise in the UK recorded in Leeds, Bristol, and Scotland. And the first case dates back to 1970, when 800 people immediately complained about it human. In addition, residents of New Mexico and Sydney.

In 2003, acoustic expert Jeff Leventhal found out that this sound can hear only 2% of all earthlings. Moreover, most often this people between 55 and 70 years old have the gift. According to him, known at least one case where an ongoing rumble brought a person to suicide.

Those who hear noise call it torture. “It’s a kind of torture, sometimes you just want to scream. It’s hard to fall asleep because I hear this pulsating sound is continuous. You start tossing and turning think more about it, “says Katie Jacques from Leeds.

Scientists cannot yet determine the nature of the phenomenon and explain why does it affect people. In the early 1990s. To solve a riddle researchers from the Los Alamos National Laboratory tried University of New Mexico. However, they eventually came to I conclude that the source of the rumble is transport and factories.

Some researchers suggest that noise is actually illusion. Allegedly a rumble, which in reality does not exist, is heard sick. Others believe that this is the result of low-frequency electromagnetic radiation or seismic activity that only a select few can catch.

A number of experts suggest holders of the gift to pass cognitive behavioral therapy to help deal with noise. However, there are no prerequisites for the mystery to be disclosed soon. “This riddle exists last 40 years, and she may remain one of many secrets, ” Leventhal.

Some astronauts also hear inexplicable sounds in orbit the planet. In 2004, astronauts aboard the ISS repeatedly heard unusual metallic sound. Cosmonaut Alexander Kaleri said that the noise is like “drum kicks”.

“The crew heard a sound reminiscent of a crushed metal tin can for one second. Perhaps this sound could be connected to some device inside the station. What is it – bye cannot be determined, but in any case the check that the crew spent, shows that there are no changes in any instrument compartments, nor in the atmosphere of a station that would change instantly, if there was a breakdown of the skin, “a spokeswoman said earlier Russian Space Agency Sergey Gorbunov.

Since then, the noise source has not been established.