Famous Volga researcher of anomalous phenomena Gennady Belimov and Volgograd researcher of unexplored phenomena of the psyche and Roman Valiulin during one of his expeditions to The Medveditsky ridge was found under the feet of a noticeable pebble. There is a lot of surprising in these parts, here is a strange-looking stone It was decided to leave as a souvenir. – The first thing caught my eye – this is a through hole of the same shape on both parties, – says the curator of the research group “Consciousness” Roman Valiulin. – The area around the hole is fused. Most likely, linear lightning hit him, which in these places Not unusual. And this means that we are dealing with a unique pattern, because the shape of the hole in this case is the shape of the lightning itself. In order to investigate the fused sample, he had to it’s true, he succumbed with difficulty: neither a hacksaw nor Bulgarian. A tiny piece of the fused part, which is still managed to get, carried to the laboratory of VolSU. 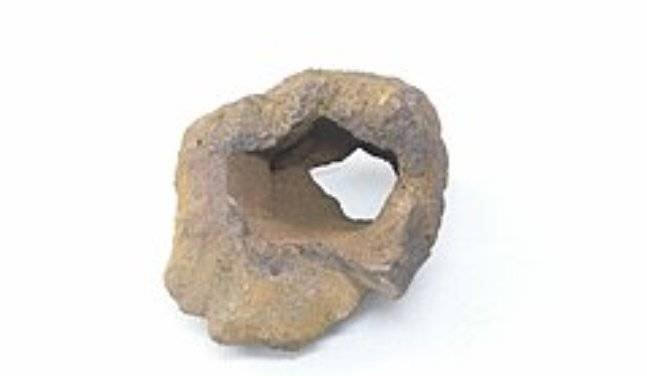 Geologists, having hardly looked at it, declared that it is sandstone, which, by the way, is about 90 million years old! When melted a piece of interesting stone fell into the hands of a laboratory engineer Valentina’s metallographic forensic techniques Combat, it became finally clear what the researchers found in actually a unique instance. – Having studied the stone, Valentine Vasilyevna was convinced that the melted part of the stone, throughout probability, contains an element not known to science, – Valiulin continues. – “Analogs to this substance among the known science does not exist! “- with these words the official ends stamped research document Faculty of Physics VolSU. Fighting failed to etch (etching is the combination of a particular reagent with structural components of the test substance to determine its structural constituents) a mysterious element that is contained in the melted the structure of the stone and is the main link in the unknown alloy. His hardness was unusually high: on average above 80 units HRC – Of all terrestrial substances and elements, etching is the most difficult amenable to stainless steel, the hardness of which is 75, 80 units HRC and above. It is etched in aqua regia at a temperature of 50 degrees Celsius. In just eight seconds! – say chemists. -A melted piece of pebble from Lysa Gora lay in aqua regia at a temperature of 70 degrees for a minute. In addition to an incomprehensible film, surrounding the fused part, nothing happened. Stone with Lysa mountains of the Medveditsky ridge have not yet revealed their secret. Volgograd scientists believe that in the resulting temperature over 2000 degrees Celsius alloy, resulting in an uncertain an unknown chemical element arose … But answer exactly Only further research will help this question. Today at Mendeleev’s table 118 elements, six more are open, but not named. The periodic system is constantly supplemented by scientists from laboratories America, Japan and the Russian Skolkovo. Will Volgograd researchers on a par with them, time will tell. In the meantime, about the “Volgograd element” only knows that its hardness is higher hardness of materials used in the space industry