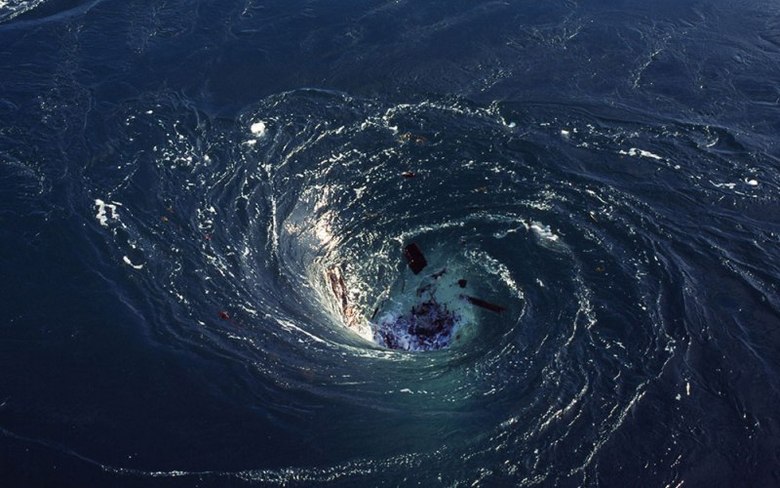 (This photo is illustrative – does not apply to the described whirlpools)

According to La Stampa, two gigantic whirlpools discovered in the Atlantic, approximately 200 kilometers from the mouth Amazons – in the region of Suriname and French Guyana. Diameter of each even according to the most conservative estimates, is at least 400 kilometers.

It’s like two huge discs “abandoned” by someone a powerful hand to the surface of the ocean. These “discs” are spinning clockwise and rather slowly – no more than 3 kilometers in hour. A peculiar wave-step forms on their border about a half meter high.

Scientists are currently trying to understand what caused of these oceanic anomalies and what impact they can have on the climate of the Atlantic and the entire Earth as a whole. The first guess was put forward by the Brazilian expert Guillerme Castelao. In his opinion, the phenomenon of a giant funnel arises from the reason for the interaction at the mouth of the Amazon two ocean currents: South Equatorial and what flows along the northern shores South America. However, these oceanic currents are not constant, but funnels for some reason do not disappear anywhere and do not change way, which indicates the fallacy of the Brazilian theory specialist. The basis for the formation of this anomaly seems to be lies a completely different mechanism, and so far scientists have not been able to unravel it. How to understand whether these giant water turbulences affect the climate Of the earth.

An interesting opinion on this subject, writes La Stampa, voiced natural mill specialist bill jones who believes that gigantic whirlpools of the Atlantic can be used to facilitate ship navigation and even to save fuel while swimming in the local waters.