A circle with a diameter of 2 kilometers was found in the east of the icy continent. He was spotted by German geophysicists at the Alfred Institute Wegner (Alfred Wegener Institute in Germany), who are now work at the station of Princess Elisabeth Antarctica Research Station).

Noticed on the eve of the New Year – December 24, 2014 – from porthole plane, making a scheduled flight around the Princess area Ragnhild Coast of Queen Maud Land in Antarctica – with radar scientists are studying the location of rocks hidden under the ice.

The round track is covered with snow, but is clearly visible from a height 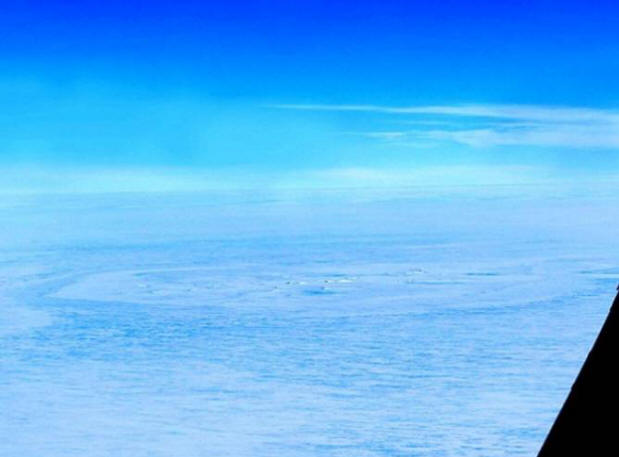 The circle was visible without radar because it was on the surface. His discoverer – Dr. Christian Muller – immediately posted a story about the find on YouTube. What attracted attention ufologists who suggested that a trace from the landing a giant flying saucer.

Geophysicists themselves in the area of ​​the track did not land, but flew over him December 26, 2014. We also noticed small circles nearby. And in in turn, it was suggested that both the big circle and the small ones appeared in as a result of the fall of a meteorite and its fragments. These are essentially craters, covered with snow.

Subsequent analysis by German colleagues showed: the meteorite version is plausible. In scientific archives there were works that indirectly confirm it. For example, in Nature magazine Australian scientists talked about a dusty plume, seen on September 3, 2004 over Antarctica at an altitude of 30 kilometers.

In 2007, in the journal Earth, Moon and Planets, American and Canadian researchers analyzed data from stations, recording infrasound signals – using a similar equipment you can determine the places of powerful explosions, including nuclear. The data indicated a powerful explosion that occurred on the east coast of Antarctica on September 2, 2004. Trace now discovered by the Germans just there.

Analysis of data from tracking stations (black triangles) brought to Antarctica – to its eastern part (intersection of lines). Here 2 September 2004, something exploded and a source formed infrasound waves.

If a circle with a diameter of 2 kilometers was really left a meteorite, then it fell, according to scientists, at a speed of about 50 thousand kilometers per hour, weighed from 600 to 2000 tons, the size was from 7 up to 10 meters. The power of the explosion that formed the large crater, amounted to 12 thousand tons of TNT equivalent.

On the photo of Antarctica from outer space, a circle is marked track location on ice 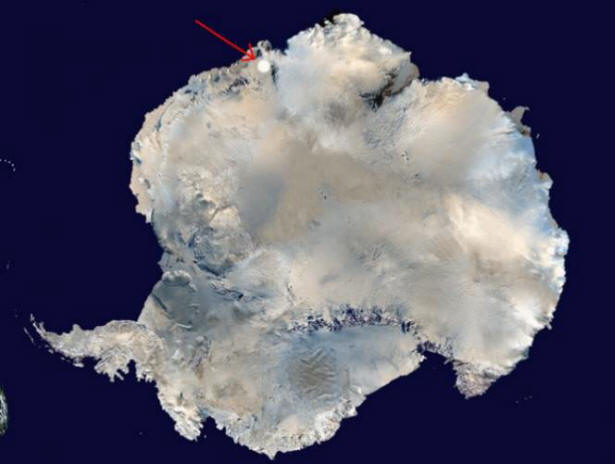