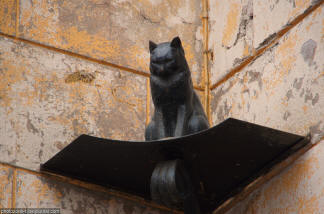 A photo from open sources St. Petersburg has many colorful features, and one of them is the availability of numerous sculptural compositions dedicated to … cats. In this city of them can be found everywhere: in yards, in parks, on building facades and window moldings … By the way, it was in St. Petersburg on November 14, 2002 the first cat monument in the country was erected. “Monument to experimental cat “can be seen on Vasilyevsky Island, in the courtyard of the main Buildings of St. Petersburg State University. Carved out of granite, a meter-long animal figure looks down on passers-by from the pedestal. The idea of ​​its creation belongs to the department Anatomy and Physiology of St. Petersburg State University and the St. Petersburg Club of Cat Lovers “Felis.” The authors of the project were sculptor A.G. Dema and architects S.L. Mikhailov and N.N. Sokolov. The sculpture is set as a sign. thanks for the benefits that cats have brought to humanity, used by scientists in laboratory experiments. After all, they spend on them experiments no less often than on dogs or rats. But the monument Pavlov’s famous dog appeared in 1935 in the yard Institute of Experimental Medicine at Lopukhinskaya Street, 12 (now Academician Pavlov Street). But only cats remembered at the beginning of this century … In the second place by fame – cat Elisha and the cat Vasilisa, who “live” in the historical center Peter. Both were cast in bronze by sculptor Vladimir Petrovichev commissioned by businessman Ilya Botka. At the end of the last century he donated sculptures to the city. At the suggestion of the historian Sergey Lebedev, the couple was placed on the eaves of two windows facing on Malaya Sadovaya street. Elisha “settled” on the corner of house number 8, and Vasilisa – on the second floor of the house number 3. Both sculptures are located almost opposite each other, only the cat looks down at the sidewalk, and his girlfriend lifted her head up … The generally accepted version says that This twin monument was created in gratitude to cats, during blockade saved Leningrad from the invasion of rats. It is believed that if throw a coin near one of the sculptures, this will bring good luck. Her literally “catch by the tail.” Very often this technique is used students on the eve of the sessions. But statues are also popular with tourists. By the way just recently, one of them, Vasilisa, disappeared and after some time was discovered in Moscow. Apparently, Muscovites are also missing good luck … By the way, there is a third cat sculpture, made by the same Petrovichev. June 2, 2005 at rally concert at the University of Technology and Design she was solemnly presented by historian Sergey Lebedev Dmitry Shagin, heading the creative art association “Mitki”. Soon, dressed in traditional clothing “Mitkov” sailor vest, bronze cat (she was nicknamed Silence of Matroskin, by analogies with the famous metropolitan prison Sailor silence) took a place on the ledge of the house where the artists’ workshop was located, to the address: street of Pravda, 16. It happened on June 8, 2005. Subsequently, this day was declared the official holiday of all Petersburg cats. March 1, 2007 Silence with Mitki moved to 36 Marata street, where it is located on a stand nearby with a workshop window on the second floor. In the courtyard of the port office, located at: Kanonersky island, 24, flaunts a small sculpture of a rather well-fed cat in a raincoat, cap, trousers and boots. The nameless “cat on a stone” recalls that in former times this place was called Kissaisaari, which is translated from Finnish means Cat Island. In Peterhof, on the waterfront Red Lake, there are three benches decorated with cat sculptures the work of Nikolai Karlykhanov. According to legend, if these cats whisper on ear desire, then it will come true. But there is one caveat: desires must be strictly defined. So, the ginger cat should ask courage and determination, white – peace and harmony in family relations, in black – protection from ill-wishers … Another cat statue, fulfilling wishes, is in the courtyard of the house Prospectus Avenue, 3, between the buildings of the school and kindergarten. Shod figure 160 centimeters high, a product of the blacksmith Sergey Melnikov, depicts the Scientific cat in glasses, which holds in its paws books. In one of the books there is an inscription – “Happiness is where you are.” They say what if you rub the cat’s glasses, what you’ve made at that moment desire will come true. But most of all, the cat loves to perform dreams related to education. There is also a museum in St. Petersburg Cats It was opened on June 8, 2011 at Yakubovich Street, 10, as a branch of the museum located in the city of Vsevolozhsk. And almost immediately got its own name – “Republic of Cats”. Besides exhibition halls, it has a club, art cafe and library. And also here the “no man’s” animals “are looking for” their owners. At the entrance to museum stands imposing sculpture of the cat Vasily by the artist Wilgenia Melnikova, “guarding” a special box in which collect donations for keeping stray cats … Irina Shlion