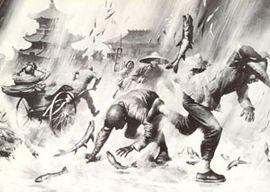 Thanks to publications in the press, a lot of evidence is known. this phenomenon, which can be considered quite reliable, since they are numerous and independent of each other. In 1578 large yellow mice fell on the Norwegian city of Bergen. no one John Collings, the rain of toads hit the English village Ackle in Norfolk. The owner of the tavern – the place where the phenomenon occurred – he was forced to collect hundreds of toads in order to get rid of them. Fish rain in Singapore, as described by the indigenous people. February 16th 1861 Singapore suffered an earthquake followed by three days heavy rains. After the rains ended, Singaporeans saw that in the puddles are thousands of fish. Indigenous people claimed that saw them fall from the sky. Scientific American Magazine 15 January 1877 recorded a shower of snakes that reached 18 inches long (about 45 cm) in Memphis. In the United States was registered more than fifteen rains from animals only in XIX century. In June 1880 it rained from quail over Valencia (Spain). September 7, 1953 thousands of frogs fell from the sky to Leicester city in Massachusetts, USA. In 1968, Brazilian newspapers They wrote about rain of meat and blood over a rather large area. Dead canaries fell in the city of St. Mary in Maryland (USA), in January 1969 According to the Washington Post on January 26 of that year, their fall was caused by a sudden death in flight, as as if they had undergone an explosion that no one had seen or I heard. In 1978, it was raining shrimp in New South Wales, in Australia In 2002 it rained from fish in the village of Korona (Greece). IN In 2007, it rained from spiders in the province of Salta (Argentina). IN 2007 it was raining from the frogs in El Rebolledo (province of Alicante, Spain). In early January 2011, in Sweden at night they fell from the sky several hundred birds, mainly ravens and jackdaws. And about that the same time, in Arkansas, USA, rain fell from the sky from several thousand blackbirds.