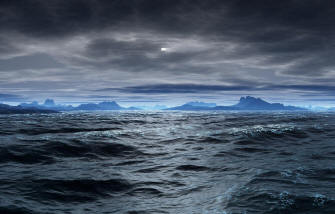 The waters of the Pacific Ocean throughout its length permeates inexplicable sound. These are not whale sounds or vibrations. ships. In 1991, scientists first recorded an unknown sound.

National Oceanic and Atmospheric Administration (NOAA) describes it as follows: “It consists of a long a series of signals with a narrow range, each of which lasts a few seconds, “” It was fixed over a very large area from one end of the Pacific to the other. ”

An unknown sound in the ocean, accelerated 20 times

The American Navy has never before recorded this sound, says a New Scientist magazine article for 2002. Sound is heard throughout the Pacific Ocean, which excludes probability of localized sources.

This sound is continuous, it has reached its maximum intensity. in 1994. Since then, he began to subside, but is still heard, reports National Oceanic and Atmospheric Administration Research (NOAA). Sounds like it gets stronger in spring and in the fall. This may be due to the sound source itself, or with the fact that for some reason in the ocean environment sounds transmitted better during this period, reports NOAA.

An incomprehensible sound is generally monotonous, unlike a variety of sounds of volcanic activity and rich in different intonations whale signals that they use to communicate. Emil Okel of Northwestern University of Chicago and Jacques Talandier, who worked in French Atomic Energy Agency, suggested that the reason volcanic activity of a special type.

In 1996, it was hypothesized that it could be sound seawater coming into contact with a large mass of lava, explained in New Scientist. They used seismometers to identify the sound source, and concluded that it comes from remote Pacific region. NOAA concluded that the source may be in this region at the location of the alleged volcanic activity. “But the origin of the sound is not understood,” – notes NOAA.

Another theory was suggested by Christopher Fox, NOAA project director for acoustic monitoring. The movement of water can make a sound exactly just like the movement of the wind.

Until an answer is found, all new hypotheses will spark people’s curiosity – is it suddenly an unknown sea creature? Or maybe Is it a geological anomaly or an unknown phenomenon? Some explanations seem more likely than others, but since 95% oceans have not been studied by man; probability cannot be ruled out discover something truly new.

Scientists had to deal with mysterious sounds before, but they were all explained. For example, Bloop — a loud bass sound found in the Pacific Ocean in 1997 over several thousand km, arose as a result of shaking of ice fields when colliding and compressing, melting ice in the sea and breaking off blocks from glaciers.