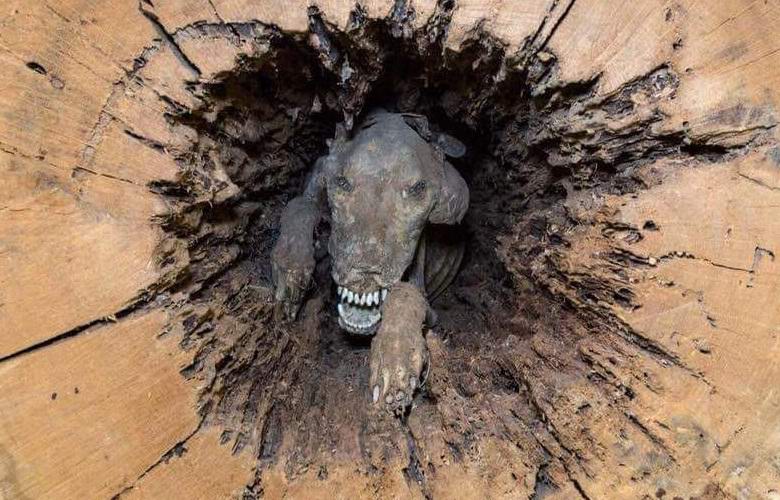 Imagine that you are a lumberjack. You cut down a tall oak, and when the tree falls to the ground, it turns out that there is cavity. But this is not the strangest. Inside the cavity are shown mummified remains of a dog!

This amazing event took place in the last century, however the mystery of what happened is still unsolved. how the animal managed to get there? Someone says that under the oak there was a hole connected with hollow in its trunk, and a dog climbed in there, chasing a smaller animal. But the hole turned out to be too narrow, and the dog stuck in a tree, dying subsequently from thirst and turning into a mummy. Others believe that the mystic is to blame. or even teleporting a dog.

The find was made in the mid-1980s by lumberjacks American corporation “Kraft Corporation”, felled in the state Georgia. The dog was given the nickname Staki, from the English verb “stuck” – “stuck”. Analysis of the remains showed that the animal died in the 1960s. It is believed that the corpse was mummified, not decomposed. due to dry warm climate, oak tannic acid and ascending air flow in the barrel (chimney effect). Animal overcame 8.5 meters inside the tree before hopelessly stuck in narrowed hollow cavity.

Today Staki, still in his mortal trapped, is one of the main attractions of the local Museum of Forest and Forest Industry.