Unusual, huge excavation in Volgograd region, the so-called Filin failure, was formed 5 years ago. But scientists still can’t give an exact answer what became the reason for its appearance and where did the 800 extracted from the earth go? cubic meters of soil.

Inspect the mysterious cylindrical earthen failure near Filin farm was the main purpose of my visit to the Kumylzhensky district. Moreover, the popularity of the Filinsky failure went far beyond Volgograd region! My guides were the journalist of the regional newspaper “Victory” Pavel Sobolev, driver of the editorial “Niva” Nikolai Ptakhin and 19-year-old resident of the farm Filin Vladimir Bukanin. Till they rode, the satellites told everything they heard about the huge pit.

It all started with what the locals heard at night an incomprehensible hum, and in the morning a forester went for reconnaissance. He is saw a huge cylindrical recess in the ground and reported on it to his boss Oleg Kochetov. He informed the head of the district. 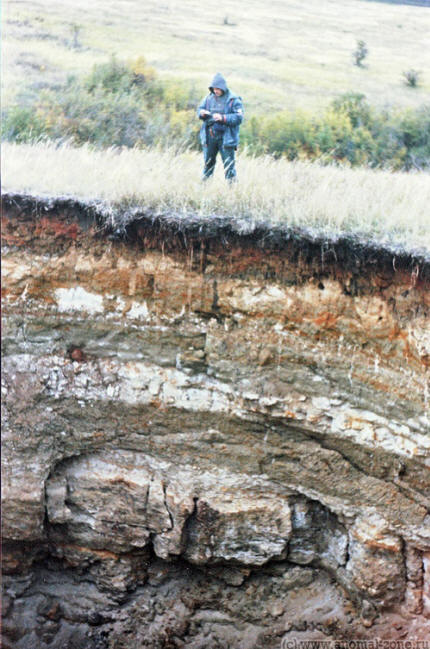 The emergency workers called by the Ministry of Emergency Situations examined the pit and gave an opinion. By their According to the data, the depth of the dip is 8 meters and the diameter is 11.5. He formed ostensibly due to the collapse of the rock into voids washed out by water. However many who visited the edge of the Filinino pit with this conclusion strongly disagree.

Well, it doesn’t fit in my head that a soil cylinder weighing not one thousand tons may disappear overnight. There is still a number Questions for which the version of emails does not give answers. Why, for example, according to eyewitnesses, at first from the pit at night was the light coming Why at its bottom, if it was a failure, there wasn’t even traces of the top layer? And it’s very embarrassing even, as if Wall surface of a wall cut by a mill.

Trying to find a solution by going down to a nearby ravine. Dense grass turf on a slope, a vertical wall of layers sandstone, marl, thicket of branches of apple trees, thorns, young poplars. I walk about thirty meters along the bed of a dried-up stream – no drifts, landslides, grottoes, indicating a connection with the pit. Rising I decide to go down to the failure itself. Vladimir Bukenin and Nikolai Ptakhin, securing a towing tape, help me do this.

I carefully examine the walls, stones, picking the ground with my boot – ordinary cake of sedimentary rocks, except that there is a dark cherry layer sand. “No traces of the UFO excavator were found, – laughing, I report upstairs and, having stuffed pockets for memory with stones and cherry sand, on the same towing belt I go up.

The entire return journey of 60 kilometers to the village of Kumylzhenskaya with excitement put forward the most incredible versions of the appearance of the pit: soil went into the voids formed by groundwater; pressed the ground meteorite or alien ship; aliens using their super technicians took a sample in the form of a cylinder for research; giants from other worlds they played pies …

No matter what they say, the locals have been carrying it for the fifth year already guests, relatives to failure as to the local attraction, and just like us, carefully strain brains looking for an explanation. Someone has an idea to use Ostap Bender’s experiences and raise money to repair failure.

And then you can start selling medical sand, stones for conspiracies, and so on, so on! You look, the village rises, gets rich, men will return from duty, the streets will be filled with children! If only to whom the idea did not come to make a landfill or cattle cemetery out of a mysterious pit. This happens after all, too …