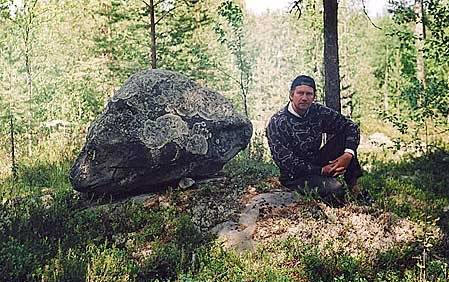 To paradoxical conclusions came scientists studying the possibility of the existence of parallel life forms on our planet. By their according to the most common-looking cobblestones and boulders may be old and young, inhale and exhale, lasting for several weeks and even move independently.

It is possible that in the coming years, scientists will be able to declare that stones have their own consciousness. After all, stories about “walking stones “have long filled the pages of popular science publications all over the world.

A truly amazing discovery during a scientific expedition did the researchers of Karelia, they discovered not just “walking” or “fulfilling wishes” boulder, and … “singing”. The head of the expedition, vice-president of KRO “Raseya” Alexey Popov kindly shared with the “National Geographic Society” materials of his discovery.

In the mass consciousness of an ordinary Russian, the Republic of Karelia with every year it gradually becomes what it once was Lapland for Europeans is a distant, half-hiding country on the territory of which any miracles are possible. Therefore for residents In Russia, this region is full of truly mystical charm. Before of all, this is due to the uniqueness of the historical development of Karelia, associated with her “Hyperborean past.”

The inheritance of the inhabitants of the republic received the ancient Knowledge, encoded in the numerous megalithic monuments that Karelian land is literally filled. It should also be noted that serious, in-depth studies of Karelia were conducted extremely few. The originality of Karelia lies in the fact that, unlike most Russian regions whose sights today well studied, described, numbered and cataloged, this region can still give researchers new discoveries and finds. And the most unexpected!

So in folk memory fragments of ancient legends and legends about certain “idol stones” set by anyone in such remote places where even the locals navigate with by labor. The large collection of these legends was collected at one time by the famous Karelian radio journalist Nikolai Isaev but, unfortunately, he’s already not among us. Among the legends he collected stood out one thing – “somewhere in the Karelian wilderness there is a large boulder, as ancient as itself land.

And that boulder stands on a rock in the middle of the swamps. And set that boulder our ancestors in such a way that day and night he “sings” only to him understandable melodies, but a person will come to him with kind thoughts and a bright heart, and a stone will help him and tell you what to do, and will relieve pain and fatigue, and give him protection from the forest beast and nightly fears. ”

Singing stones – a legend or a past?

This legend was told to Nikolai Isaev by one of the small-timers the village of Ushkovo, which stood on the banks of the Karelian river Okhta. At first, Alexey Popov decided that this was only a beautiful fairy tale, more that look for a lone block in the middle of endless swamps, the thing frankly not grateful. But in the end, the researcher decided to try his luck and after a long search the expedition members came to a small rocky hill, climbing which, at its very top they saw a stone-seid mounted on a kind of flat stone backup.

Although it would be more accurate to say they didn’t “see”, namely, “heard” – the stone really “sang”! True, it was, of course, not human. vote. A strong wind broke through a narrow gap between a flat the top of the rock and the bottom of the stone thanks to the same stone the backup that travelers saw as soon as they approached closer. The feeling was unforgettable.

The sounds were very melodic; sometimes they resembled marching polyphony of the orchestra, and sometimes – deduced by a lonely a traveler somewhere high in the mountains the sincere melody of a pipe. All depended on the strength of the wind and, most incredible, on the position stone, which sometimes changed its position, swaying back and forth, left and right. 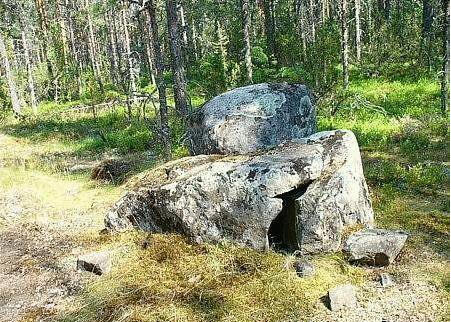 In other words, a flat stone stand was not needed just to make a special “gap” between the top rocks and stone, due to which, in fact, there were sounds, but also acted as a kind of “hinge”. Stone as if balanced on this stand, which was observed even with the unarmed the eye. This also happened when there was no wind at all, although Alexey Popov knew perfectly well that no wind was able to wiggle a monolith of similar sizes.

In the study of stone, the researchers created completely a certain impression of the “man-made” of this “composition”. Around the stone towered trees and shrubs, and only in one a natural passage was opened in the direction, not overgrown with trees, which allowed free movement of the wind.

In this direction the stone was oriented. Around the stone members expeditions saw a perfectly trodden platform, although any they never found fresh traces. Apparently, someone came to this stone since ancient times. But why? What ritual magic rites committed here – one could only guess about it.

Moreover, despite the fact that each ritual boulder is unique, there are “relatives” of the “singing boulder” of Karelia. Back in 1972 expedition of the Karelian Branch of the USSR Academy of Sciences, which led by archaeologist A.P. Zhuravlev, on Kolgostrov in Lake Onega a boulder stone was found that also possessed an original property to produce a melodic sound, but not by blow wind, and upon impact on its upper part of a small cobblestone.

This boulder, by the way, is still known in the local tradition as A “bell” stone. When scientists examined this stone, which is a natural boulder measuring 1.5? 0.75? 0.67 meters, they found that its upper part has pronounced traces numerous strokes. And such an unusual acoustic effect to the stone gives a crack on the upper part, forming a resonating cavity. Later, even Petrozavodsk specialists became interested in stone conservatory.

Having studied the melodic properties of the “sonorous” stone, the musicians put forward the hypothesis that it can be used as self-sounding instrument of a lithophone. Moreover, the “sonorous” stone in local tradition still retains its cult destination. It is believed that the sound made by a stone relieves a person’s pain, balances his mental and spiritual powers. A fragments of asbestos found in the cleft of the “sonorous” stone ceramics suggest the use of it as cult object in the late Eneolithic – the end of 3 – the beginning of 2 thousand. BC. ancient Sami population living in these parts.

Trying to understand the source of cult worship, including singing stones among the local population Alexei Popov found that Due to their crystal structure, boulders have battery properties. If you heat a stone, it accumulates in it warm: he retains it and then slowly gives it back. But he can to accumulate not only heat but also natural magnetism and vibrations.

The northern peoples, including the ancient Sami and Korel, used to a sustainable view that stones absorb energy from environment and return it to those who worship them. IN echoes of the Sami are still preserved echoes of ancient knowledge about vitality of stones. This tradition of worshiping stones, regardless of change of religious forms is still alive, especially in Karelian outback.