The first reports of an unusual phenomenon associated with the Penza a monument to soldiers who died in local conflicts appeared in early June. A resident of the Arbekovo neighborhood Evgeny Malyshev noted that an oily liquid accumulates under the elbow of the soldier’s figure of unknown origin.

He also noted that when trying to photograph them, standing on the memorial, the pictures were black. He later noticed that the leaks become stronger at night, and almost invisible in the morning and afternoon. It has been suggested that this phenomenon is similar in nature to myrrh-streaming icons.

Monument to soldiers who died in local conflicts. 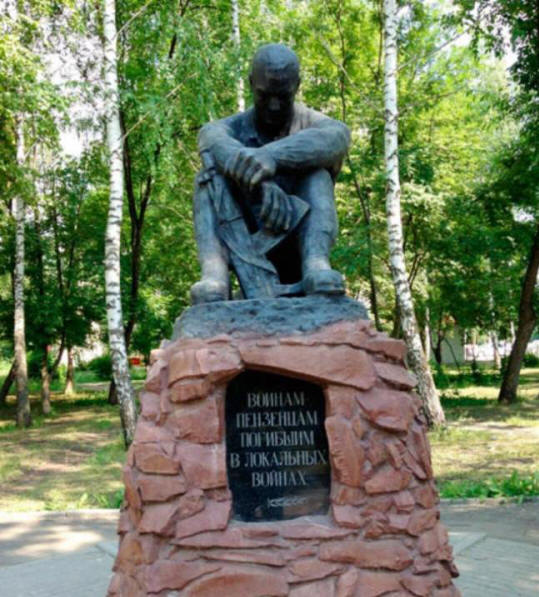 Monument to Penza soldiers who died in local wars was installed at its current location in 2012. is he is part of a memorial complex called “U torn star. “The sculpture is made of fiberglass instead the concrete figure of a soldier who used to stand near the Palace of Culture Railway workers.

The concrete from which the old sculpture was made established in 2005, was not durable enough. In 2010 the foundation of the monument cracked, and in 2011, after a strong a hurricane figure lost its head. It was decided not to restore the old monument, and create a new one from a more durable material, moving it to a new place.

The oily liquid on the sculpture appeared during a few days. Local resident who often comes to this monument, said that the “myrrh-streaming” began recently. Herself the sculpture remains completely dry, however under the warrior’s elbow drips are observed.

Head of the Penza branch of Cosmopoisk Vladimir Kukolnikov took several pictures of the monument. According to his observations, first there was a stain on the sculpture, and a few days later it appeared a trickle of unknown substance. Some liquid was collected for analysis and transferred to Ufokom.

Smudges of fluid on the sculpture. 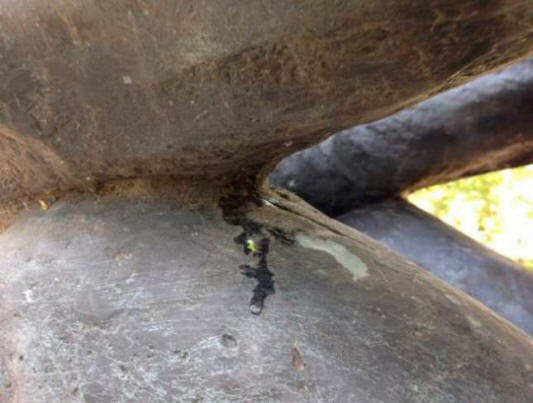 Information published on the media about the properties of liquids is somewhat contradictory. Representatives of the film crew of channel 11 report on an unusual phenomenon, report that she does not leave oily traces on a napkin, transparent and does not have a pronounced smell. In this way, it differs from the oil that appears when myrrh-streaming icons.

At the same time, vPenze.ru correspondents describe it the properties are slightly different: the liquid is not as thick as sunflower oil, but it’s more difficult to erase it from your fingers than usual water. In addition, according to their data, it emits a sweet smell, reminiscent of the smell of oil. Vladimir Kukolnikov noted that “the fluid was slightly sticky between the fingers,” but no smell was felt.

Rector of the Church of Peter and Paul Pavel Matyushechkin called to treat an unusual phenomenon calmly. From point of view Orthodox icons can only be myrrh-streaming, while the monument is not an Orthodox shrine. Priest John Yavorsky even suggested that someone deliberately smears a monument oil imitating myrrh streaming to attract attention. In that the phenomenon has nothing to do with myrrh-streaming, sure and sculptor Maxim Kulev, author of this monument.

In his opinion, fiberglass could accumulate over time fluid that is released from microcracks in the material, mixed with its components. The Penza branch of Cosmopoisk also suggested that an oily liquid might appear due to that the paint on which the monument was coated was diluted with turpentine. However, the sculptor claims that turpentine does not was used.

Messages about the myrrh-streaming monuments appeared several times in media and earlier, but in most cases they are not related to the phenomenon of myrrh-streaming: this term used in them in an ironic sense or in connection with a certain political context. However, the site “Orthodox Penza” notes that father Cronides witnessed the case actual myrrh-streaming monument. This phenomenon took place on sculpture of Durnovo located in the village of Treskino at a time when there, work was underway to restore the Nativity of Christ.

The Penza-Cosmopoisk branch also decided conducting an additional collection of the substance that continued generated on the surface of the statue and local analysis chemists. Additional samples were collected and transferred to research in the Penza forensic laboratory. Analysis conducted by Alexander Arkadyevich Utkin, who himself became interested this case, after reading about him in the newspaper “About the city.”

Various versions of the origin were tested and worked out. substances: low-quality colorful coating of the statue made fiberglass, which at high daily average temperatures could distinguish a binding base, like drying oils, as well as the possible condensation. After chemical analysis, in as a result of which neither glycols nor petroleum products, components of paint and varnish solvents, it seems most likely that we are dealing with condensate, that is, plain water.

During the next visit to the monument, at the top of the elbow warrior, a small crack was noticed, and since the statue is hollow, then inside, especially in the cool morning hours, could accumulate in small amounts of water that dripped onto the knee, creating a permanent wet spot. The crack turned out to be technological a seam that is always present at the junction of molds when casting sculptures. The seams, of course, are putty and smooth so that they do not break the integrity of the overall surface of the sculpture, but in this case, the seam was apparently patched up poorly or the sculptor did not notice a flaw.

A vial of substance from Penza was delivered to one of forensic laboratories of Minsk. 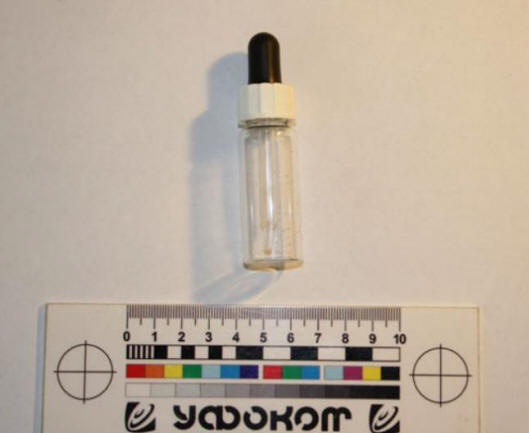 A probable explanation was also found for the oily properties of the liquid. Samples were taken in early June, the most intense flowering trees, especially linden, birch and willow, which are abundant grow near the monument. Probably flowering products, falling on the monument, they imparted the mentioned qualities to liquids.

And yet, in order to dot all the i, it was a decision was made to re-examine the substance, including and palynological analysis. This work is currently initiated Ufokoma is performed in one of the forensic laboratories Minsk