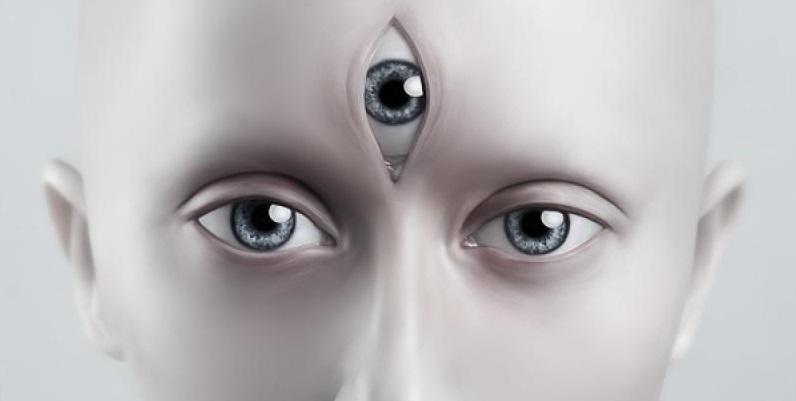 How many eyes does a person have? A ridiculous question, of course two! However esotericists, yogis and followers of oriental culture believe that each person, without exception, has a third eye, that’s just only a few are able to use its unique properties.

Indian sculptures depict ancient gods as many-armed, sometimes many-faced, and on the forehead just above the nose, many have third Eye. According to legend, the gods could see the past and future, read minds, hypnotize, move by the power of thought giant stone blocks, scooping knowledge from the information bank the universe.

Third Eye – The Eye of the Gods was donated by them and people, but they are not appreciated the gift, became proud and began to use the Eye for gratification of own exorbitant ambitions, achievements and sharing authorities. And then the gods closed the third eye to people, so that endowed by excessive force, mankind did not destroy itself.

The gods could completely deprive people of their gift, but they hoped that over time, humanity will mature, get rid of vices, and when this happens, the gods will return to people their superpowers, the third the eye will again be “sighted.”

In search of a third eye

They searched for the third eye in Ancient Egypt, Ancient Greece, India and Tibet. In 1938, the Nazis sent to Tibet research expedition led by Ernst Schaefer. The funding was taken over by the Anenerbe Society, which was engaged in occult research, oversaw the undertaking of the Reichsfuhrer SS Himmler.

Travelers returning in 1939 were greeted as national heroes. Schäfer received an honorary dagger from Himmler’s hands SS and the ring “Dead Head”.

Prisoners of concentration camps served as the “material” for research, which were delivered to hundreds of secret laboratories. How many people monsters killed in white coats – it’s unknown, but the SS units, manned by super-soldiers, the Eastern Front never appeared. The eye of God for the Nazis remained closed.

Is there a third eye?

The parietal eye exists in many reptiles, covered with a thin skin film. It is also present in mammals, but it is highly modified and located deep in the brain. Its functions are not clear to scientists. Not thanks to him whether animals foresee the future natural cataclysms? Stories about how animals leave a city that left to live a few days or hours, do not surprise anyone.

A person also has it, called the pineal gland. He was interested Galen, Descartes and Leonardo da Vinci. In a two-month-old embryo he very large, but with the growth of the fetus and the development of the child decreases and by the age of ten no more than a pea and goes deep brain.

The pineal gland really resembles an eyeball – it has a lens and receptors for the perception of colors and can rotate like an eye. But just what does he see in the back of the skull?

Indian Yogis claim that with appropriate training everyone can master their inner vision and read letters in sealed envelopes, see through the wall, look into the past and the future and much more. But the Eye opens only to those who have reached peaks of spiritual perfection. Well, those who dream use the gift for personal gain or gain power, spend years in vain – the Eye does not open to such people.