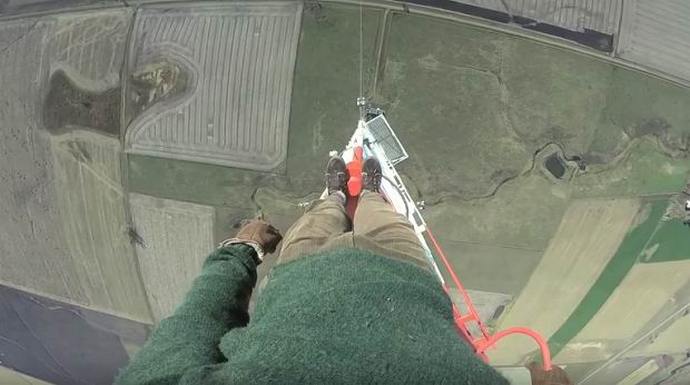 The climber, known so far only under the nickname Urban Endeavors, climbed a television tower 475 meters high. Practically rose without any insurance and climbing equipment, using only a pair of special gloves for better grip. However, he climbed along the external diagonal bars, what made such an ascent to the sky especially risky and dangerous for life.

Urban Endeavors does not specifically disclose its present the name or address of the TV tower that he climbed so famously. Firstly, such events are worn in most cases. illegal in nature since almost universally persecuted by law. Hence some secrecy. As for the address, then suffice it to say, says the crazy climber, that such There is a television tower on the American continent. Fact that he is not he wants someone to decide to repeat his experience and … break his neck. A as practice shows, this is exactly what happens in most cases …

Regarding the frenzy of the brave Urban Endeavors

Almost all people are afraid of heights, maybe someone less, someone generally panicky, but there are no people who are free and completely walked fearlessly along the ledge, like a cat – a man is far from built like this plastic animal. Therefore, I was afraid from childhood heights. And if only a year ago they told me that I can do like that, that is, I’ll climb to a height of almost half a kilometer, and not uphill, but on a TV tower, very fragile in appearance and terribly swaying in the wind, I would never believe in this frenzy from my side. But once I decided to overcome my fear heights, and began to train in climbing. First on small heights, then it’s cooler and cooler. And now – the real result! On the I spent more than a year filling it all daily training, sometimes no less dangerous than this climb.

Was I even a little scared this time? I can only say that my nerves remained almost all the time under complete control. A this is the main thing in this case. Only once a strong wind sharply rocked the tower, and so that cold sweat broke through me. For the rest everything was normal, I rose calmly, concentrating only on the movements of his body. For this reason, it doesn’t matter whether the height in twenty meters or a kilometer.

Crazy climb from the side

Urban Endeavors spent two and a half on this risky climb hours, while he also demonstrated breathtaking stunts (watch the video). He shot something himself with a video camera, fixed on his head, the rest is filmed by the drone. The descent at the climber took much less time – only one and a half hours. Although there is an opinion of psychologists that it’s always more difficult to go down, than to go up, Urban Endeavors has denied this. According to him, going up and down is almost equivalent in danger, however physical exertion is still easier to move down, and therefore it is It turns out faster.

Finally, note that to ensure these four hours it took three months to successfully climb uphill training, inspection of the tower itself and security climbing on it so that there is no strong wind, electric load and much more that always remains for easy Everyman behind the scenes. He sees only a small part of the iceberg, and the most attractive, exciting … However, such videos This is exactly what they are designed for.