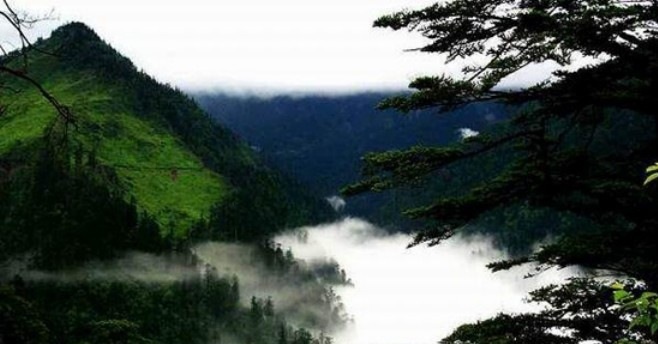 In southwest China, in Sichuan province on the eastern side of a mountain Me’an lies Heyzhu Valley (Black Valley bamboo). For centuries, locals as if struck her out of his life. For them, the valley is as if not existed. If anyone tried to question her, peasants answered shortly: “We do not go there.” And to all the curious they also persistently advised not to go there.

In the villages scattered on the slopes of the mountain, live representatives of the small yin people. They will welcome you here, and after a cup of tea, they will tell a dozen chilling stories about Mysterious valley lying behind the Stone Gate pass.

Many people went there and only rare lucky ones returned back. In the valley, the compass needle is “crazy”, and even experienced ginseng hunters who know the forest like five fingers roam like bewitched in one place and cannot find a way out. People, animals disappear there without a trace. If the guest wants, they will take him to pass, but then let him go alone.

Of course, there are many exaggerations in these stories. The same peasants repeatedly visited the valley, and most returned home alive and healthy. Yet cases of mysterious disappearances in the valley happened. And there were too many to count all of these stories are just horror stories. 1949 year. In China, the civil war. Kuomintang squad, leaving from the Communists pursuing them, he decided to hide in the Heizhu Valley. They heard about the notoriety of the valley, but they had no choice, in that no civilians were taken prisoners. 30 soldiers left for the pass. No one else saw them.

The Chinese People’s Army squad behind them did not go followed, he camped on the pass and sent to the valley of three scouts. A few days later, one returned. Terrified he told that there are no Kuomintang residents in the valley, and his comrades too mysteriously disappeared, literally dissolved before his eyes. To go to the valley once again as part of a new detachment the fighter categorically refused even under the threat of execution.

In the early 50s, China began to develop its vast spaces. Geologists, topographers, and surveyors appeared in the region of Mount Me’an. More people began to walk into the valley, naturally increased and number of disappearances.

1950 year. In that year, the Valley removed a plentiful harvest – they disappeared 98 people. In the same 50th, in the vicinity of Mount Me’an, the plane disappeared. The wreckage his search team found, of course, in the Valley of Black bamboo. Included in the batch of aircraft, inspecting the crashed car could not establish the cause of the accident. Airplane was absolutely operational. Brought the “black box” in the solution to the mystery did not help: until the accident, all systems worked fine, the pilots joked and expressed no concern.

1955 year. A party of military topographers worked in the Heyju area. Two soldiers were sent for provisions. They decided to shorten the road and went through the valley. This was the wrong decision. They entered the valley but did not come out. They were searched, but only rifles of the disappeared were found soldier.

1962 year. A whole exploration party disappeared in the valley. The conductor returned alive. According to his story, as soon as they passed pass, a dense dense fog fell on the valley. Holding out his hand he already did not see his fingers. The conductor sat down on the ground and decided to go nowhere. do not go, wait until the fog dissipates, no matter how much time gone. When the haze of fog began to break through the sun again, it became look for geologists, but did not find any. Directional rescue the party also found neither geologists, nor their things, nor equipment.

1966 year. A party of topographers of 6 people left in the valley and didn’t came back. One was found, but there was no sense from him: poor thing clearly damaged in the mind.

In 1976, a party of foresters went into the hollow. The group has returned losing two people. Returnees again spoke about the thick the fog that engulfed their comrades.

Little by little the number of disappeared in the Valley of black bamboo became in the hundreds. Among the locals went the most various rumors. In the villages whispered about living in a valley a giant cannibal panda, someone saw a two-meter high in the valley monkey (bigfoot?). The most “educated” claimed that fog – tricks of aliens abducting people in the valley for studying.

To reassure the population (and at the same time to deal with these disappearances), the Chinese Academy of Sciences sent to the valley several expeditions. And although not one was lost, everyone returned alive and healthy, they did not bring clues to secrets.

The largest and most prepared expedition was 1997 years led by Yan Yun. For a month, scientists studied the valley, proceeded her far and wide. Nothing supernatural scientists found. However, the valley turned out to be a truly anomalous zone.

The structure of the geological rocks of the valley turned out to be complex and diverse, and very unstable. Scientists did not deny the possibility short-term toppings of the earth. (Opened underfoot unfortunate zemlyatse … Am – and there is none!) Strong emissions were recorded from the ground of toxic gases (decomposition products of certain rocks trees).

And yet this does not explain the numerous disappearances of people.

While scientists are looking for a clue to the Valley, local businessmen forge on secret money. Tour companies offer amateurs to tickle nerves make a trip to the Chinese Zone, try to meet in Heizhu Valley with aliens or find a portal to a parallel world. If you wish, you can go there too.

But remember: not everyone who leaves for the Valley comes back.