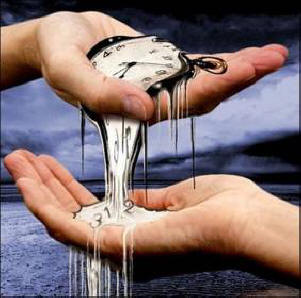 On Earth, there are places where the so-called chronic phenomena. People there sometimes stop navigating in time, and the clock crashes …

For example, in the Montenegrin city of Kotor, all watches show the wrong time – some are in a hurry, others are behind … In the Middle Ages, so that correctly calculate the time, city authorities were forced to introduce position of state pedometer. This person was prescribed every day at sunrise to leave home and with the same speed to go first towards the city gate, and then back. At the same time, he had to look at his watch. If the duration one way journeys in time differed from the duration way back, this indicated an anomaly.

Interestingly, city residents associated hourly interruptions with a change in the force of gravity. The clock crashes – then wait earthquakes! The townspeople packed up and hurriedly left their dwellings. Whether their expectations were met or not – this is a chronicle are silent. However, the last earthquake in these places It happened in 1979, and time continues to “bewilderment”.

To the east of Tver, between the villages of Tukhani, Sobolin and Sosnovets, there is the so-called Sandovsky triangle. People here for days go around, compasses and other devices stop working. IN the presence of this anomaly Tver mine surveyor Valentina Zemlyanoy I had to make sure from my own experience.

“In the course of our work, we had to examine this area, – says Valentine. – And what: when they entered the zone, one of I found out our comrades that his watch stopped. Steel check, and it turned out that the clock stood at the same time for all members expeditions.

When we left in Tukhan, we asked the locals for time. And looking at their watches, they were surprised to find that they calmly go, moreover without a lag. They were the same again it’s time that in Tukhan, Sandovo, Moscow …

Later we talked about an extraordinary phenomenon coming to Tukhan. geophysicists. Interested, they went into the zone with their radiometric device “Pine”, which measures the level radiation and establishes the presence of magnetic fields. But the appliance disconnected, and they couldn’t do anything about it. ”

V. Zemlyanaya sees the cause of the phenomenon in occurrence underground sand and gravel mixtures. From here comes the magnetic anomaly, which affects appliances and people. As for the watch, that either lag, then go right, then exit the abnormal zones, the progress of the chronometers is apparently accelerated and after some time returns to normal rhythm so people don’t notice.

Something similar is observed in the Verkhovazhsky district of Arkhangelsk area. Archival records for June 30, 1912 state that members of a scientific expedition who visited there field, headed by a scientist of the Imperial Academy of Sciences Alexander Loidis, all the clocks crashed at the same time.

In the village of Morozovo, which is 28 km from Verkhovazhye, in 1944 committed five military aircraft emergency landing: pilots simultaneously all devices went off scale, orientation was lost. However, This happens not only in Morozovo.

Back in the 90s of the last century, St. Petersburg geophysicists recorded in the vicinity of Verkhovazhye local geomagnetic an anomaly. According to one version, the cause of its occurrence could become iron ore deposits. Not so long ago arrived in these places three-man expedition led by a candidate geographical sciences Anatoly Ekhalov. Researchers have calculated that the center of the anomalous zone is located in a small forest on the banks of the river one and a half kilometers from Chushevits.

Before entering the zone, they purposely checked a watch. But through For five hours, all timepieces already showed different times: quartz the clock ran two minutes ahead, the mechanical five minutes, and the electronic ones generally stopped and showed the same thing the time is 11:65! By the way, even replacing the battery the next day does not I was able to bring them to the “feeling”.